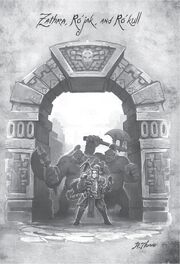 Gordok's Elite (or simply the Elite) is a group of best ogres from the Gordunni clan put together by Throgg after Malus took over the clan and became their new King Gordok. Malus put them in Zathra's command and tasked them with catching Aramar Thorne and his group of friends as they traveled across Thousand Needles and Tanaris.

Gordok's Elite encountered and killed a group of Grimtotem tauten near the Feralas' border and took their boat to travel.[1]

During the annual Speedbarge Boat Race, Raphael was given a couple of coppers by Gazlowe to shout that the ogres of Gordok's Elite were trying to stop the race in order to get the ogres distracted.[2]

Later, Karrga, infuriated at Malus and the Hidden for lying and betraying the ogres, abandoned the Hidden citadel in the Hellfire Peninsula with Throgg. With Zathra's and Malus' death,[3] the Elite's status is unknown, but it may have dissolved.