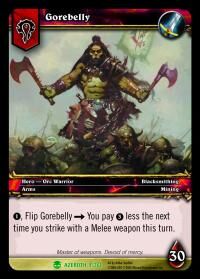 Master of weapons. Devoid of mercy.

Gorebelly is an orc warrior. He once fought Onyxia and survived to become High Warlord.

There are quotes from him and references to him on the following cards: