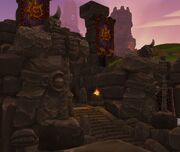 The Gorian Empire[1][2][3] (also referred to as the Gorian ogre imperium[4] or simply the Ogre Empire[5][6]) was the nation-state of the ogres encompassing various holdings on Draenor. On alternate Draenor, it was notable for being one of the few empires on the world, but lost its former dominance after the rise of the Iron Horde, which forced Imperator Mar'gok to align himself with the orcs to ensure his empire's continued survival. He would have, however, turned himself against the orcs if the situation was favorable.[7]

Gorgog the Gronnslayer was the first Imperator of the Gorian Empire, which he founded after showing the ogres it was possible to kill the gronn, thus proving that they weren't gods.[10] Gog - as he was known at the time - lived one thousand years before the opening of the Dark Portal. Yonzi, the leader of a small group of remnants from the Apexis arakkoa that had been destroyed two hundred years before, learned of a critical cache of Apexis artifacts buried beneath the ruins of an Apexis settlement on the northwest coast of Talador now occupied by the ogron and their ogre slaves. Ogron were too violent to barter and bargain with, but the ogres were more intelligent than the ogron, and more importantly, angered by their enslavement.[11]

The arakkoa approached the ogres in secret and began to teach them the ways of the arcane. Because the ogres were descendants of Grond who was, in turn, a creation of the titan Aggramar, they were naturally attuned to the arcane. The arakkoa had never seen new spellcasting techniques developed so effortlessly and were delighted. One of the first ogres to master the power was Gog, who the arakkoa believed to be the perfect leader to incite rebellion. Gog did rebel, but not against the ogron: he targeted the gronn, whom the ogron and ogres revered and feared as gods. Though stunned, the arakkoa could not argue with the results. Gog did not only kill one gronn with his magic but several. By his fifth, stories of his deeds were known to all captive ogres on Draenor, erasing their fear of both gronn and ogron. Under Gog, the ogres rose up against their ogron warlords and Gog was renamed Gorgog: "King Gog". The city became Goria, "Throne of the King".[11]

The arakkoa quickly moved into Goria to search for Apexis Crystals and artifacts in the ruins Goria was built on, but Gorgog quickly put an end to it. As a sorcerer himself, he had no interest in giving away any potential source of power. The arakkoa left, but not for long. Yonzi and his arakkoa were infuriated and they decided to take the land by force. They launched a surprise attack on Goria in the dead of night, but Gorgog and his apprentice arcanists, as well as the countless newly freed ogres, fought back. The arakkoa were defeated and Yonzi was captured. His death was slow and gruesome. Despite the promise of undiscovered Apexis crystals, further arakkoa incursions into Gorian lands were few and far between afterward. In the slowly expanding Gorian Empire Apexis crystals became highly prized and eagerly sought out by ogre sorcerers.[11]

The ogres ruled from Goria for six hundred years. This was until Imperator Molok attempted to claim the Throne of the Elements, and the elements themselves, for the empire. His attempts to subjugate both resulted in the near destruction of the former, and the 'wounding' (in a sense) of the latter. This ignited a great war between the ogres and the orcs, as the latter came to the defense of the spirits and eventually laid siege to Goria. Seeing no reason to waste countless lives in an attempt to break down the city's significant fortifications, the orcs were content to keep their distance on the surrounding hills and starve out their enemies. The Gorians believed they could outlast any siege thanks to their ocean port. Due to the tumultuous state of the elements, the orcish shaman were not as effective in calling on their powers as they once had been.[12]

However, as the months passed, the ogres found themselves unable to maintain their empire. Trade via the ocean was not enough; the ogres needed access to their network of land-based trade routes, which the orcs had severed. Imperator Molok and his sorcerers revisited their Apexis crystals, searching for a way to break the siege. In time, they discovered the arakkoan legend about the Curse of Sethe and began experimenting with ways to create a similar affliction among the orcs. They succeeded, and soon the so-called red pox spread like wildfire through the orcs' encampments, culling vast amounts of the orcish combatants.[12]

The orc Nelgarm and his fellow shaman, realizing that the pox was an unseen attack from the ogres and that the siege was now doomed to fail, beseeched the elements to destroy Goria. The orcs and the elemental spirits both understood that Molok would resume meddling with the Throne of the Elements if the orcs failed, and so the elements agreed to unleash their fury upon Goria. The shaman gathered outside the ogre city's mighty walls and witnessed the fury of the spirits. What happened next would never be forgotten. A roaring storm churned above the city as the ground groaned and trembled. Over several hours, lightning, fire, and earthquakes ravaged the city, bringing down every wall and building, sealing off the escape routes and burning the ships in the harbor. When nothing but ash and rubble remained, the earth itself wrenched open like a giant maw to swallow Molok and the remains of his great city whole.[12]

Untold thousands of ogres died that day; none were left alive by the elementals. Only whispers of the event would reach the other Gorian cities and outposts, but those whispers would be enough to discourage any further tampering with the elements. The orcs were victorious, but they had suffered massive losses and witnessed a destructive power they never wanted to see again. Nelgarm and the other shaman were particularly frightened by the elementals' wrath and said that the need for a unified orc army had passed. There was little argument, and the clans returned to their lands.[12]

Two hundred years after Goria was destroyed, the draenei arrived and built Shattrath City in the location where the city once stood.[13]

At some point after the fall of Goria, the Nagrand city of Highmaul became the new capital of the Empire. Despite the loss of their original capital, the ogre sorcerer kings continued to maintain an iron grip over their empire using a variety of artifacts, enough that the nation would ultimately last for a thousand years. Trusted lieutenants were given magical gems that allowed them to enforce the emperor's will out in the field.[14] The ogre civilization ruled Draenor for generations until the arrival of the draenei. Their seat of power is Highmaul, a massive city that belies the ogre reputation for brutish stupidity, full of bustling markets and wealthy nobles, and the roar of the Coliseum crowd echoes through the streets of the slums.[15]

After a period Grommash Hellscream, chieftain of the Warsong clan, leading raids deeper and deeper into Gorian lands, the ogres retaliated by nearly destroying the clan and mortally wounding Grom's mate, Golka. When Grommash called upon his forces to hunt the ogres down, most of his warriors were executed and Grommash himself captured, bound to a tree in a desert by the ogre warlord. However, Grommash managed to escape by slipping through his bonds and devouring the warlord.[16]

Around that time, a brutal slave uprising erupted within the ogre Gorian Empire's capital of Highmaul, which claimed the life of many Highmaul citizens and officials.[17] Their emperor was decapitated by Kargath Bladefist, who then declared the birth of a clan of his own, the Shattered Hand clan, comprised of liberated slaves. Like him, the slaves severed their own chained hands and proceeded to "drown Draenor in ogre blood."[18]

The empire was eventually destroyed during the rise of the Old Horde. During the orcs' war against the draenei, most ogres joined the Horde. That is, except for the ogres of their capital Highmaul, and Blackhand wanted the last holdouts dead. After the orcs destroyed Shattrath, the Warsong clan and Twilight's Hammer clan went to Highmaul, with their chieftains Grommash Hellscream and Cho'gall (the latter an ogre himself, exiled from Highmaul) also part of the siege. Eager to exact vengeance, Cho'gall personally killed Imperator Mar'gok. With the powers of fel and the Void, he bound Mar'gok to his throne and burned him alive.[19]

In an alternate universe, with the rise of the Iron Horde, the Gorian Empire lost its dominance on Draenor. The last emperor, Imperator Mar'gok, reluctantly aligned the empire with the orcs to ensure its continued survival, although he would gladly turn against the orcs if the situation was favorable.[7]

In Frostfire Ridge, the Bloodmaul clan made use of vast slave labor in order to extract ores and gemstones from the Bloodmaul Slag Mines, for the Gorian Empire.[20]

The Highmaul clan are known to value Artifact Fragments, the fragments of lost artifacts from the ancient ogre empire of Ashran, used as currency by the Alliance and Horde on the island.

During the excavation in Nagrand, Ko'ragh was the only ogre to survive direct exposure to a mysterious relic and was left with a near-complete immunity to all magic. Despite of this gift, he remained under the orders of Sorcerer King.[21]

In Mar'gok's Overwatch, the Gorian arcanists are investigating ways to enchant weapons and armor to create and improve Felbreaker armor. The project is led by Grand Magister Reglakk. Infusing armor with Felbreaker magic allows immunity to all forms of magic, even fel magic.[22]

Ultimately, the Alliance and Horde launched an assault upon the capital of Highmaul in order to defeat the Gorian Empire once and for all. Amid the first assault, however, Cho'gall reveals his presence, as well as his intentions to overthrow the Sorcerer-King and destroy Highmaul. After much fighting, Highmaul's defenses were broken, and Alliance and Horde forces confronted Imperator Mar'gok himself atop his citadel. Following a vicious battle (in which Cho'gall takes part but is also defeated), Mar'gok was slain. Much of the King's secrets, especially the Felbreaker knowledge, was subsequently taken following his death, to be used by Archmage Khadgar in his hunt for Gul'dan.

The death of Imperator Mar'gok, as well as the fall of Highmaul, marked the end of the empire's power.

The Horde military ranks of Legionnaire and Centurion could have come from the historical traditions of the Gorian Empire as they both refer to the Roman Empire.