The Gorian wars were a series of conflicts fought primarily between the ogres of the powerful Gorian Empire and the various orc clans and factions which also inhabited the world of Draenor as well as the alternate Draenor. When the planet's ogres rose from their humble conditions and formed the Gorian Empire thousands of years in the past, they became the dominant race on Draenor. Doing so, however, brought them into direct conflict with the disparate orc clans scattered across the world.

The Gorian Empire fought the orc clans for centuries, killing many in retaliatory actions and enslaving countless more. Eventually, however, following a determined campaign by several orc clans, as well as a brutal slave uprising in Highmaul itself and the subsequent death of the emperor, the Gorian Empire became markedly weakened.

Ultimately, the orcs on the alternate world formed the Iron Horde, whose rise signaled the empire's loss of dominance on Draenor. Hostilities between the two races formally ceased with a truce, although the ogres had suffered a grave blow to their power. The specifics about the main-universe empire are currently unknown.

Rise of the Gorian Empire

Thousands of years[1] before the first opening of the Dark Portal, the ogres inhabiting the primordial world of Draenor succeeded in breaking free of the influence of the gronn, a large race of creatures whom the ogres had previously believed to be gods.[2] With this turn of events, the ogres began to organize themselves as they continued to increase in power and relevance on the world. Eventually, as they became the most powerful race on the planet, they formed the Gorian Empire, led by magically gifted Sorcerer-Kings who acted as the ogres' emperors.

As the Gorian Empire established itself, it began an extensive tradition of capturing and enslaving prisoners from other races, most notably the orcs. The ogres had come into conflict with the many orc clans that were scattered around the world. Many of those captured by the ogres were either used as cheap labor throughout the empire, or brought back to the capital of Highmaul to serve as gladiators in the coliseum.[3] 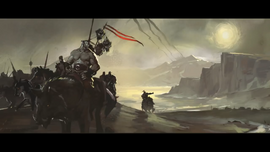 An orcish raid into Gorian lands

The orcs eventually responded to the Gorian Empire's actions by launching brutal raids deeper and deeper into Gorian lands. In response to raids on ogre possessions, such as slave caravans, the ogres were known to raze entire orc villages to the ground and slaughter or capture their inhabitants.[4]

Grommash Hellscream, chieftain of the Warsong clan, was responsible for many of the orcs' more ferocious raids into Gorian territory. In retaliation, the Gorian ogres assaulted the Warsong lands, nearly destroying the clan and badly injuring Grommash's mate, Golka. Enraged, Grommash ordered a large offensive against the Gorian Empire although it ultimately ended in disaster when the ogres set a trap for them, with many of the chieftain's warriors executed and Grommash himself captured.

A Warsong village is razed in retaliation.

Tied up in a desert and taunted by the ogre warlord, Grommash refused to be broken and succeeded in slaying his captor. Upon his escape, the chieftain rallied and inspired his remaining clansmen, encouraging a new war against their ogre oppressors and renewing their will.[5]

Somewhere around this time period, meanwhile, a savage slave uprising occurred within the Gorian Empire's towering capital of Highmaul in Nagrand. The instigator of the revolt, Kargath Bladefist, personally decapitated the ogres' emperor. At the uprising's conclusion, which killed many of Highmaul's citizens and officials, Kargath declared the establishment of a new clan: the Shattered Hand clan. Consisting of other freed gladiators who had intentionally severed their own hands to mimic Kargath, this new clan rose with the stated intention to "drown Draenor in ogre blood".[3]

At some point, the Gorian ogres attacked the orc fortress of Blackrock Foundry. Though the orcs were surprised by the initial attack, Blackhand, with the Doomhammer in his hands, led a counterattack and won.[6]

For many years, the wars continued between the two races, although the Gorian Empire had gradually begun to decline to a state where it was a shadow of its former self. When the war in Draenor began and the Iron Horde (a combined faction of most of the orc clans) rose to power, the empire was forced to agree to a truce. Too weakened to stand up against the formidable power that this new horde represented, the Gorian Empire's last leader, Imperator Mar'gok, aligned his nation with that of the orcs', formally ending the Gorian wars.[7]