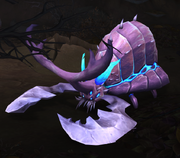 Gorm are giant bugs found in Ardenweald, where they are responsible for helping the process of decomposition and decay.[1] Their purpose is to devour discarded wildseeds[2], and unused parts of the forest, allowing new life to grow there. Expended wildseeds are thrown to Gormhive for the gorm to consume.[3]This is done through their digestive juices that dissipate the anima in their food.[4] They are drawn to consume anything that is lacking anima.[5] The gorm only know to consume, and normally the Night Fae keep them under control. Spriggans use bits of anima-less detritus tied to the end of sticks to steer the gorm they use as mounts.[6]

However, with the Night Fae busy responding to the anima drought, there aren't enough resources to keep the gorm in check and they've started growing out of control, becoming a threat to Ardenweald instead of one of its natural mechanisms.[7] Due to the anima drought, even the land has become a source of food for them,[8] and they have begun chewing at the edges of Ardenweald itself.[9] This can cause parts of the land to collapse or break away from Ardenweald.[8] A few gorm have found and consumed wildseeds that still contain ancient nature spirits—an act that grants them the spirits' strength and intelligence. Gorm who have consumed such wildseeds can gain the ability to speak.[10][9]

The parts of gorm are used for a variety of purposes by the crafters and artisans of Ardenweald. Gorm gris, a type of ambergrease[11] that a gorm may regurgitate after eating,[12] is used in construction, mending, crafts, and even as an addition to rations.[11] Gorm husks that have been soaked in running water for several days can be shaped into high-quality armor,[13] while gorm claws and stingers can be made into sharp-edged weapons that never break. A person who creates equipment out of gorm parts is known as a gormsmith.[14] In the absence of a matriarch, the fae egg-tenders are able to control the hive.[15] Gorm can be rounded up with lures made from culexwood, which requires an offering, usually song, for the tree to willingly give its wood.[16]

While some gorm (usually gormlings) are kept domesticated,[12] wild gorm grow in hives across Ardenweald, including the Creeping Hive, Gormhive, Crumbled Ridge, and Dusty Burrows, and likely previously Blackthorn Grove. In the absence of a matriarch, gorm egg-tenders are the leaders of a hive, and they can turn into queens.[17] The wild gorm encroach across the land and have invaded both Tirna Scithe and the abandoned Tirna Noch.

The sting of a flying gorm is incredibly painful and can cause temporary paralysis, even to creatures much larger than the gorm itself.[18]