Grand Apothecary Putress was a chief apothecary of the Forsaken's Royal Apothecary Society. He played a vital role in the development of the "New Plague" the Forsaken sought to create. 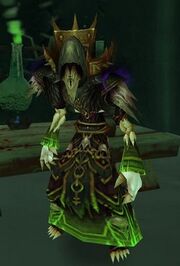 Putress, as seen during the Scourge Invasion.

Grand Apothecary Putress was an important figure during the second Scourge Invasion, researching the zombie infestation from an apothecary camp in Shattrath City.[3] Eventually, he began sending Horde members back to their capital cities with severed Scourge heads that had zombie brains containing both the plague and his anti-plague compound which partially cured them. Putress believed his research on the Scourge contagion held the secret to curing the Plague of Undeath[4] and also would facilitate their fight against the Scourge.[5] As he expected, his research eventually helped to end of the zombie invasion. When Warchief Thrall called for a meeting in Orgrimmar with other Horde leaders to discuss how to deal with the Scourge, Putress was present. Sylvanas Windrunner offered Putress's services to Thrall citing that his knowledge of the plague would make him a valuable asset in the campaign against the Lich King.[6]

Battle for the Undercity

Putress oversees the destruction wrought upon the Wrathgate by the new plague.

Grand Apothecary Putress in the Battle for the Undercity.

In the early stages of the Northrend Campaign, the Royal Apothecary Society put the finishing touches on the Forsaken blight, a new plague that not only killed living creatures but also destroyed the undead. In the middle of the battle at Angrathar the Wrathgate, after Dranosh Saurfang was slain by the Lich King, Putress appeared on a cliff overlooking the battlefield and used Forsaken catapults to unleash the blight on the unsuspecting forces gathered below, indiscriminately killing Scourge, Horde, and Alliance alike and forcing the Lich King to retreat back into Icecrown Citadel. The losses on all sides were great, and perhaps the greatest loss of all was the death of Highlord Bolvar Fordragon.

In the aftermath of the battle, it was revealed that Putress and several members of the Royal Apothecary Society had sided with Varimathras, who had secretly remained loyal to his nathrezim brothers and the Burning Legion while serving under Sylvanas Windrunner. Together, they had orchestrated a coup d'état and forcefully taken control of the Undercity, nearly killing Sylvanas in the process. While the Horde banded together with Thrall and Sylvanas to kill Varimathras and retake the Undercity, assaulting it directly, the Alliance joined with King Varian Wrynn and Jaina Proudmoore, embittered by the loss of Bolvar, to invade the city via the sewers to deal with Putress and retake Lordaeron. Ultimately, Putress was killed in Varian's manhunt, and the king was left to gaze at the full horror of the Royal Apothecary Society's work. Putress' head was then severed from his body and Varian tossed it to Thrall's feet.

Upon his death, his soul entered the Shadowlands where it was later harvested of its essence by the death knights of the Ebon Blade.[2]

His first appearance was as a level 80 elite at the new apothecary camp on the Terrace of Light in Shattrath City during the Echoes of Doom Scourge Invasion, where he was involved with the following quests:

Before an invasion in Orgrimmar

<Putress looks you over in a very unsettling fashion.>

Aren't you a remarkable specimen....

Have you considered making a sacrifice for the greater good?

During an invasion in Orgrimmar

Do you know who I am?! I'm a very important person! You're supposed to be protecting me from the Scourge, no dilly-dallying with pointless conversation!

I'm no fighter, but you are. So get out there!

In Shattrath City after

What a landmark discovery! The Royal Apothecary Society has spent years working to break the secrets of the Lich King's plague, and I've finally done it!

Despite this turning point in history, there is still so much to discover. I have more experiments to conduct... test subjects to acquire...

At least I don't have to worry about Scourge necropoli. The Alliance is dealing with that problem. This leaves me plenty of time to delve into the secrets of the plague and uncover what I can.

The Battle For Undercity