The Great Gnomeregan Run is a micro-holiday that takes place in October. In this gnome-themed, Alliance-only event, players can partake in a footrace from New Tinkertown in Dun Morogh to Booty Bay in the Cape of Stranglethorn.

Calendar
Join the Gnomes as they celebrate their unrelenting moxie! Race across the Eastern Kingdoms, from Gnomeregan down to Booty Bay![1][2]

Official site (2020 version)
Are you a gnome? Do you know a gnome? Would you like to BE a gnome? (And who wouldn’t?) Then rise UP to the challenge of The Great Gnomeregan Run on Saturday, October 10 from Gnomeregan to Booty Bay.

Whether you’re a level 1 gnome (highly encouraged), a level 87 Dark Iron dwarf, or a level 120 worgen, you’ll be able to join in this fun run beginning in the gnome starting area, winding through Dun Morogh, Ironforge, the Deeprun Tram, Stormwind, Elwynn Forest, Duskwood, and Stranglethorn Vale where the run culminates in Booty Bay.

It's a big big BIG world out there, but don’t worry about getting lost, there will be course markers and spectators along the way to help keep you on track. You’ll even see a few familiar faces among the onlookers including some new mechagnome friends!

Stranglethorn Vale is a dangerous place for low-level characters so you may want to find some muscle to join you along the way for a little extra protection. If you’re a higher-level character, think about playing chaperone for a gnome.

Whether short or tall, it will be a good time for all.[3] 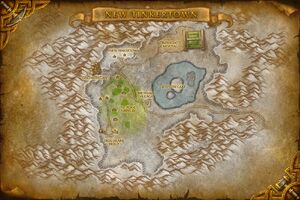 in New Tinkertown, where players can also accept the quest

[1-60] The Great Gnomeregan Run from Mina Gleespanner. The race consists of a total of 34 gates that players need to pass before they can cross the finish line in Booty Bay and turn in the quest to Prince Erazmin. Fences, gnome banners, and Coordinators are placed along the route to direct racers toward the next gate, along with many crowds of cheering Supporters offering encouragement. Running through a gate causes a burst of fireworks.

The Great Gnomeregan Run is based on the "Running of the Gnomes", an annual fan-run charity event in October in which participants create level 1 gnome characters and run along the same route from New Tinkertown to Booty Bay. Blizzard reached out to the event's organizer Dravvie for permission to base the holiday off of her charity run.[4] One of the possible appearances of the event's Supporter NPCs is based on the goggle-wearing mascot for the Running of the Gnomes (pictured right).

As of 2019, the Running of the Gnomes has been done ten times.