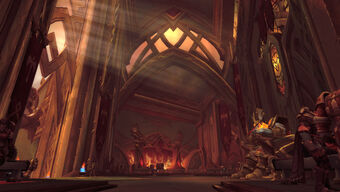 The Great Mead Hall of Skyhold.

The Great Mead Hall is the spacious southern wing of Skyhold, the legendary home of the Valarjar. The hall is used both as a living quarters for the armies of Valarjar that reside in the Halls of Valor, as well as a seat of power for Odyn himself, a principal god of the vrykul. The mead hall is constantly filled with the revelry of many aspirants, shieldmaidens, and stormforged, and is well stocked with food and drink. Along with the Hall of Glory elsewhere in the Halls of Valor, the Great Mead Hall acts a throne room for Odyn, and important ceremonies are often conducted here.[1]