Not to be confused with Great Sea. 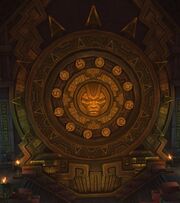 The Great Seal is the upper part of the pyramid of Dazar'alor,[1] King Rastakhan's palace in Zuldazar. It is the Horde's base of operations in Zandalar, hosting key leadership figures during their stay in the city and the wider Zandalari region.

The name refers to its relationship with Uldir, as it was one of three seals keeping G'huun contained until the proper seal was destroyed by Mythrax the Unraveler. Giant concentric wheels used to turn around the outside of the palace, which were connected to a titan disk within. Now the disk is cracked and the wheels have stopped. As Zul, Yazma, and Vol'kaal betrayed and injured King Rastakhan, Zanchuli Betrayers assaulted the palace and filled the Great Seal area, but the Horde forces led by Baine Bloodhoof killed the betrayers and secured it.