For the mountain pass in Highmountain, see Greystone. 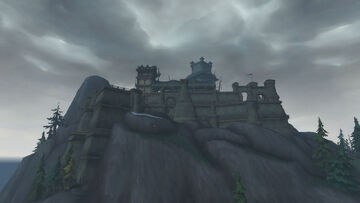 Greystone Keep is a large stronghold located just southeast of Boralus and north of Bridgeport in Tiragarde Sound. The keep sits on a large set of mountains that rise high above the Kul Tiran capital, and which grant it a sweeping view of the surrounding area. Traditionally controlled by House Proudmoore, Greystone serves as the first line of defense for Boralus's great seagate,[1] and thus the capital itself.

At the time of the Fourth War, Greystone Keep remained heavily garrisoned by marines and other troops of House Proudmoore, under the command of Tallis Skyheart. Hawkmaster Lloyd of the Waycrest Guard was also invited to the keep to teach some of the garrison the skill of training sea hawks.

Main entrance to the keep.

Unbeknownst to the keep's commander, a mutiny began brewing among the troops, as mysterious individuals approached some with offers of increased pay if they revolted. Led by Fernn, the mutineers waited until commander Skyheart was absent on a munitions check and then launched a coup to take over the keep. Though many resisted the mutiny, they were driven from Greystone as Fernn's gang took control of the fortress. Soldiers still loyal to House Proudmoore remained determined to fight the traitors and established a camp in Greystone Relief just outside the walls. Joined again by Tallis Skyheart, the loyalists initially began losing ground.

When a recently-arrived emissary of the Alliance joined the fight, the tide began to turn. Many of the loyalist injured were recovered from the field,[2] while the local saurolisks were dealt with.[3] Fernn the Turncoat and his lieutenants were also slain during further attacks on the fort, disrupting their plans to turn the Greystone's cannons on Boralus.[4] Coupled with the decimation of the mutineers, this gave the Proudmoore forces the upper hand in the struggle.

It is not known which "questionable individuals" first approached the mutineers to encourage them to revolt. It is likely that they were agents of House Ashvane, which is active in eastern Tiragarde Sound in trying to undermine the power of House Proudmoore.