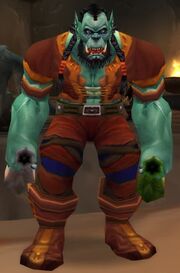 Grunt Karus is an orc grunt located in the Bank of Orgrimmar in the Valley of Strength in Orgrimmar.

Along with his brothers, Koma and Soran, Karus claims to have fought at the Battle of Mount Hyjal.

Guarding the bank and treasures of the Horde is far more satisfying than dispensing coins and trade goods from inside a cage of iron.

I would not exchange places with one of those quill-pushing goblins for a moment.