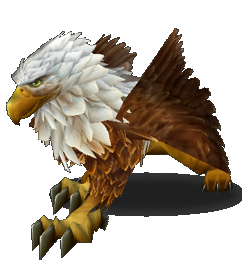 “The Horde had dragons, we had the gryphons. We won that war.”

Gryphons (aka griffons[2][3] or griffins[4]) are powerful and highly intelligent winged beasts with the forequarters of an eagle and the hindquarters of a lion. Native to the Aerie Peak and the Hinterlands, they have long shared an inseparable bond with the dwarves of the Wildhammer clan, who later introduced them to the rest of the Alliance.

Gryphon riders are mostly dwarves of the Wildhammer clan, but more recently Ironforge dwarves and humans alike have started deploying gryphon riders of their own. Trained gryphons can be called through a special whistle.[5] Medivh's own whistle was a thin golden cylinder carved with dwarven runes.[6]

“They love lions in Stormwind, and the gryphon is half lion. Of course they might not like which half.”

Gryphons are majestic creatures of the skies, and are, much like hippogryphs and wyverns, more than just beasts; they're both intelligent and cunning.[8] They share a common ancestry with wyverns,[9] and were first befriended by the Wildhammer dwarves when the Wildhammers settled in the Hinterlands in the years following the War of the Three Hammers, roughly 230 years before the First War. The creatures became eblematic of the clan and an inseparable part of their culture.[10]

Ever since, the Wildhammers have revered the gryphon as a sacred animal. While some say that the dwarves keep them, it's more of a friendship, and to befriend the Wildhammers one must first befriend their gryphons.[8] During the Second War, gryphon riders from Northeron came to the aid of the Alliance to fight back against the marauding Horde,[11] and during the Third War the wild dwarves responded to the call once more by bringing their proud, implacable beasts — noble symbols of the Alliance's fortitude — to keep the skies of Lordaeron free from enemy forces.[9]

The dwarves have since introduced their noble steeds to the rest of the Alliance,[12][13] with some hatchlings even being descendants from the same gryphons ridden by Falstad Wildhammer and his entourage into Grim Batol after the Second War.[12]

Gryphons' keen eyesight allows them to see over vast distances and warn their riders of any dangers that lie ahead.[14] The breed known as the armored snowy gryphon has proven capable of weathering the harsh winds of Northrend,[15] and according to Mei Francis, when they attack, blood almost never stains their feathers.[16]

The gryphons of Aerie Peak are trained by the Wildhammers to kill forest trolls, their ancient enemy.[17] The dwarves also train young gryphons by sending them out to hunt rattlesnakes in the Twilight Highlands.[18] According to Huntsman Markhor, the elder gryphons known as razorbeak skylords are a much rarer breed than the rest of their kin, and are responsible for mating and "creating murderous offspring".[17]

The gryphons of the Northrend peaks are the most resilient of the species.[19]

According to the Ironforge gryphon master Gryth Thurden, the steeds of the Wildhammer dwarves may be fast, but they cannot stand the heat of Ironforge's Great Forge, unlike Ironforge's own gryphons.[20]

The mangy silvermane wolves of the Hinterlands prowl the woods where Aerie Peak's gryphons range and have been known to kill gryphons that stray too low.[21] The Dragonmaw orcs of the Twilight Highlands use gryphon carcasses as bait when wrangling black drakes, but only carcasses from wild animals; drakes hate the stink of dwarf on their food.[22]

The Roughnecks provide all gryphon mounts for Kul Tiras.[23] They are led by Boss Tak, a Wildhammer dwarf from the Twilight Highlands who taught them how to tame and ride gryphons instead of hunting them for meat and pelts.[24]

When finding abandoned gryphon eggs, a female gryphon might choose to adopt them.[25]

Gryphon mounts are the flying mounts for Alliance players. They come in a variety of colors and are capable of running on all fours like a cat for land travel, rendering it useful as a ground mount.

Gryphons are tamable by hunters as part of the Feathermane family, added in patch 7.2.0. In order to tame Feathermanes, hunters must purchase the

Gryphons seem to be fairly rare; at the time of the arrival of orcs in Azeroth, King Llane Wrynn possessed only a handful, and these were seldom ridden except for official business.[26]

Gryphons are able to understand humanoid speech, or at least a few words - a person can verbally command a gryphon to fly to a certain location and it will do so, without further instruction, or need of a rider.[27][28] Gryphons often express affection to familiar riders, and respond to subtler instructions such as the position of their rider on their back.[26] Command of a gryphon does not require great experience, at least as long as the gryphon knows its destination.[27]

The gryphon is the symbol of resolve and fortitude among the wild dwarves of Aerie Peak. From the tip of its powerful beak to the back of its swishing tail, a gryphon can reach lengths of 9 feet. Its wings can span up to 30 feet, and are powerful enough to launch the beast into flight from a standing position.

Gryphons are intelligent and loyal, suppressing their natural aggression and territorial behavior to assist the wild dwarves who share their mountain homes. They are, however, partial to horse flesh and unless closely watched indulge their taste to the detriment of nearby cavalry. In recent times, the trolls of the Witherbark tribe in the southern Hinterlands have been capturing gryphons to attempt to train their own windwarriors. They have thus far been unsuccessful, but it is conceivable that the trolls will eventually find a way to duplicate the success of the Wildhammer clan and produce gryphon riders of their own. In combat, a gryphon attempts to swoop down on its prey, attacking from above. Gryphons are intelligent enough to avoid fighting in situations in which they cannot make their attack at an advantage. The sale of gryphon eggs is considered a crime in most human and dwarf holdings, but black market eggs can be had for prices at around 2 to 3 times less than the amount of a fully trained gryphon.[29]