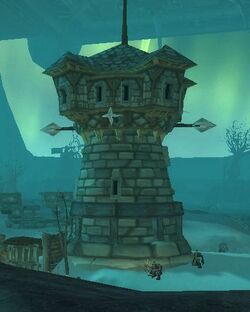 An Alliance guard tower at the entrance of the Carrion Fields.

Guard towers are armed scout and watch towers, dedicated to defending settlements instead of just detecting approaching armies. Humans, dwarves, high elves and orcs are known to build guard towers and they all look very different from each other.

Guard towers were scout towers outfitted with deadly bolts that could pierce targets on land, sea and air.[1]

These brick towers provide the first line of defense against enemy invasion. The arrows that fly from these bastions are renowned for their deadly accuracy.[3]

During the Invasion of Durotar, Admiral Proudmoore had a unique Castle built in Tidefury Cove, surrounded by five Castle Guard Towers.

These magical towers are used by various enemy factions in the Path of the Damned campaign, specifically the high elves of Quel'Thalas and the mages of Dalaran.

While human scout towers are plentiful, no true guard towers existed until Wrath of the Lich King. Sometimes guard towers were home-made by putting ballistae on top of normal towers, like in the Alliance Base of the Battle for Mount Hyjal raid.

Modern human guard towers can be seen in the following places: