For the the organization from the Warcraft film universe, see Guardian of Azeroth.

"Guardian" redirects here. For the druid specialization, see Druid#Specializations. For the type of pet, see Guardian pet. For other uses, see Tirisfal (disambiguation). 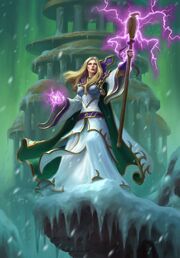 Aegwynn, the penultimate, the only woman, and the most powerful Guardian of Tirisfal.

“Besides, Azeroth has found its Guardian in you, Young Trust. You have all the power you will ever need, Khadgar. It is your heart, your courage, that makes you this world's Guardian. And a better one than I ever was.”

— The final words of Medivh, the Last Guardian, to his former apprentice Khadgar

The Guardian of Tirisfal, also known as Guardian of the Tirisfalen, was a single mortal champion magically empowered by the Council of Tirisfal to secretly fight the Burning Legion and other demons wherever they might have appeared on Azeroth.

The Council of Tirisfal was an order of immensely powerful beings who were empowered to protect the world from the Burning Legion over the millennia. The Guardians were imbued with powers from all members of the Concil of Tirisfal, becoming extremely powerful mages in their own right. Typically, Guardians took rooms in the Violet Citadel.[citation needed]  At the time Aegwynn became Guardian, all Guardians were given the honorific title "Magna", which comes from a dwarven word meaning "protector".[1] It is unclear if Medivh ever received this honorific. He is usually known as "Magus".

The Guardians of Tirisfal have served for ages to protect the world from demonic influence.

After the events of Return to Karazhan, Medivh refers to Khadgar as the new Guardian, but Khadgar refuses the position.[5] Medivh counters, however, by stating that it's not power that makes a Guardian, but courage and a just heart, qualities he says make Khadgar a far greater Guardian than himself.

The issue of Med'an being canon or not is something that had been brought up in the fanbase since his introduction. When asked about it at BlizzCon 2016, Alex Afrasiabi responded: "Certain fiction exists outside the World of Warcraft that we love, but is it necessarily what we would consider canon? So Med'an as Guardian, isn't considered canon in Warcraft lore, which is why in the last five years you haven't seen a reference to him. Um, so, that doesn't mean that there can't be a story for Med'an, it's just not like it was laid out in the comics."[7]

Based on what Afrasiabi said at the end, the character himself still seems to be canon, just not him being Guardian. Given the many events from the comics that have been subsequently referenced in the game or other materials - such as Cho'gall's mutation, Garona's vendetta against Cho'gall in the Twilight Highlands, Aegwynn's death, and Kathra'natir inside of Meryl - it seems that for the most part the events of the comic still happened, just without Med'an being the Guardian. When asked further, Afrasiabi clarified that he did not mean the entire comic was non-canon, only that Med'an being Guardian was.[8]

Foundation of the Order

Following the inadvertent summoning of several demons of the Burning Legion into the streets of the newly founded city of Dalaran,[9] and the summoning of elementals from the Elemental Plane by both elves and humans,[10][citation needed]  the ruling magocrats of that city sought out the help of the high elves. While the Convocation of Silvermoon was able to help neutralize the immediate problem, the underlying threat of the Legion remained.[9]

The Council of Tirisfal at the time of the creation of the Guardian.

Though there would only ever be one Guardian at a time, they held such vast power that they could single-handedly fight back the Legion's agents wherever they were found in the world. The Guardian's power was so great that only the Council of Tirisfal was allowed to choose potential successors to the mantle of Guardian. Whenever a Guardian grew too old, or wearied of the secret war against chaos, the Council chose a new champion and under controlled conditions channeled the Guardian power into its new agent.[9]

[Ulthalesh, the Deadwind Harvester] to drain the life from Deadwind Pass.[12]

The Guardians of Tirisfal were finally corrupted by Sargeras when his avatar fought the Guardian Aegwynn in Northrend. Though the Guardian Aegwynn successfully defeated Sargeras, his dark spirit entered her. When Aegwynn went rogue, the Council of Tirisfal created the Tirisgarde to hunt her down. Nielas Aran was a member of the Tirisgarde, but he came to understand Aegwynn's perspective and fell in love with her, but when they had a child together, Sargeras' spirit passed from Aegwynn into that child.[13]

Determining that she, not the Order, should determine the heir to the mantle of Guardian, Aegwynn imbued her new son Medivh with the powers of a Guardian, though these powers would not be realized until he reached adulthood. Unbeknown to Aegwynn, the spirit of Sargeras had tainted Medivh's soul. Medivh would eventually be overcome by the will of Sargeras and conspire with Gul'dan and his orcish Shadow Council to open the Dark Portal which would allow the orcs to invade Azeroth.

Following Medivh's death during the First War, it was decided that none could resist the temptation of the Guardian's powers.[14] Thus, no new Guardian was chosen, and nothing more was ever heard of the Order of Tirisfal.

At the behest of former Guardian Aegwynn, Archmage Jaina Proudmoore, and Meryl Felstorm (a member of the first Council), a new Council of Tirisfal was formed to combat the threat of Cho'gall and his foul masters while the Alliance and the Horde were focused on the war with the Lich King in Northrend.[15] The first Guardian of the new Council was Med'an, the child of Medivh and Garona Halforcen, who took up the mantle at the behest of his father.[6] Following the defeat of Cho'gall in Ahn'Qiraj, Med'an returned the power of the Guardian back to the Council.[16] The Council has yet to choose a new Guardian.[17]