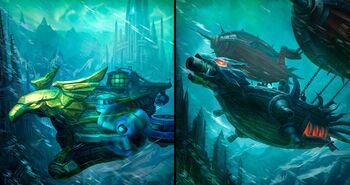 Gunships are massive heavily armed and armored aircraft (or airships) which can be found in the arsenal of both the Alliance and the Horde, although the gunships of each differ significantly. Gunships are the result of many hours of labor and painstaking amounts of advanced engineering, generally gnomish and dwarven for the Alliance, and goblin for the Horde. They may serve several roles, from transport to attack aircraft, but regardless of their function, all serve as versatile and maneuverable platforms from which attacks may be launched or operations conducted.

Gunships tend to be vulnerable to ground- or sea-based artillery and, due to their nature, do not survive for very long if they become seriously damaged. As such, they usually deploy shock tactics. Utilizing heavy firepower and quick movement to pacify resistance, or deploying other ground attack aircraft, like gyrocopters, or ground personnel like marines, gunships can succeed with light casualties where other forces simply could not.

Born of tenacious gnomish and dwarven engineering, Alliance gunships tend to be more compact and incorporate a larger amount technology and machinery into their structures. Unlike Horde gunships, they are propelled through a series of specifically placed powerful propellers.

These gunships contains numerous heavy cannons: four smaller ones on each side of its fuselage, with several large turrets mounted on the main deck which can also serve an anti-aircraft function. There are ten hatches (five on each side) located just above the four smaller cannons, and from which artillery can be fired. Additional guns and turrets have been known to be mounted on the main deck as the situation requires.[1] The main deck is also the location of emergency escape craft, which resemble lifeboats. At the very front of a gunship is its figurehead, a very large, gold-colored eagle with small, spread wings protruding from the neck, representing the Alliance. The Alliance gunship tends to more resemble an actual ship, with its captain's quarters constructed in a similar fashion and its cannons lined up along the hull.

There are also numerous layers and decks to these gunships; an upper observations deck accessed by stairs, a main deck where the captain's and navigation's center is also located, and two lower decks where the majority of the other functions on the ship are carried out. The main deck of the ship additionally serves a platform from which gyrocopters may take off and land from, and each gunship will often possess its own compliment of these smaller aircraft. The lowest level of the ship also contains a large hatch which appears to function both to drop explosives from, and as a means of facilitating troops to parachute out for boarding or airdrop actions. The lower levels of the vessel also appear to host the mess and crew quarters. At the very lower stern of the gunship is the open rear deck balcony, which is used by troops to parachute from and an alternate disembarkation point for one or two flying mounts;[2] it could also possibly be used as another platform from which to survey/fire on the ship's environment.

In terms of armor, a gunship is usually well-protected. There are large strips of metal running the length of the airship's hull and the only areas which appear to be entirely unarmored are certain parts of the lower fuselage, as well as the open-air decks. The gunship's main turbines are also protected by a thick layer of metal. Despite this, these propellers appear to remain the ship's greatest weakness; it has been observed that even in the four main propeller version, if only one of these engines fail or become damaged, the entire gunship can go down.[3]

In the Alliance military, gunships fall under the authority of the navy and are generally treated as a sea vessel.

The two propeller version was first used at Icecrown, and some time later, the four propeller version at the Isle of Conquest. The first type has been used in Deepholm and Pandaria, but the majority are of the second type.

Mainly engineered by the goblins and usually larger and more jagged-looking, Horde gunships are no less intimidating in their fearsome array of weapons and armor. These airships maintain altitude using two vast air balloons suspended above the ship, which are nearly as large as the fuselage itself. The airship accelerates through the use of a large and powerful engine located at the very back of the vessel. It is possible that this type of gunship is unable to reverse, as there appears to be no mechanism in place for this anywhere on board.

These gunships are very heavily armed, possessing six large cannons (four in the front section of the ship and two in the back), as well as six gun platforms (three on each side) protruding from the fuselage, on which smaller turrets or personnel may be positioned. Additionally, a particularly large double-cannon is located just under the ship's figurehead and serves as one of the vessel's most powerful offensive weapons, likely used in engagement. Just above the main cannon at the front of the ship is its figurehead, a grey wolf's head, from whose mouth one of the cannon barrels protrudes. As a result of the somewhat dispersed placement of its guns, the ship is able to fire in almost any direction at any given time (except directly upwards).

There are three levels to this type airship: a platform and rampart connected to the ship's air bladders high above the decks, the main deck which holds the majority of the vessel's munitions and its command center, and the lower level on which all the cannons (save the main frontal one) are located as well as the furnace room for the ship's engine.[4] If needed, smaller artillery such as cannons or catapults can be, and are known to be, placed on the main deck of the gunship to provide additional firepower.

While slightly less armored than its Alliance counterpart, the Horde gunship is still protected by strips of metal girding the body of the ship and even the air blimps suspended above it. The airship also has a number of spikes protruding from seemingly-arbitrary points in its structure, such as the balloons, or the frontal and back fuselage; this is likely an aesthetic feature rather than a practical one. One of the gunship's flaws appears to include the dangerous placement of cannon shells and other munitions for its main cannon in the open on deck. Should this stockpile get hit, it could trigger an explosion or fire on board.[5]

A battle between gunships.

Gunships have played, and continue to play, a pivotal role in conflicts throughout Azeroth and beyond. Though generally small in number, they have taken part in some of the most decisive engagements in recent history. Such engagements include the war against the Lich King, where gunships featured prominently in Alliance-Horde skirmishes in Icecrown as well as in the final assault on Icecrown Citadel itself. Alliance and Horde gunships also took part in the war against Deathwing, where they were used to fight and pursue the Destroyer, ensuring his final defeat. During the Invasion of Pandaria, gunships were relied on heavily in discovering and securing the continent, both for the Alliance and Horde. In the final days of the Garrosh Hellscream's True Horde, the Skyfire took part in Siege of Orgrimmar, serving as a launching point for assaults on the city itself.

In addition to these major events, gunships tend to feature in a large portion of conflicts in the Alliance-Horde war, where they are used as mobile bases from which to launch attacks on the other faction. Due to their heavy firepower and tough exterior, the gunships are ideal for spearheading attacks against fortified or heavily defended positions. Such bloody campaigns where they have been deployed include the Isle of Conquest and the invasion of Gilneas.