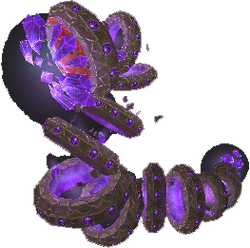 A new creature know as Kyparite worms appear in the Dread Wastes of Pandaria using the gyreworm model. It's unknown if these creatures are one and the same with just another name or if they are just mutations made of amber known as

Gyreworms are tamable by hunters as part of the shale beast family.