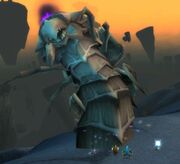 Hai'shulud is a level 65 bone worm of the Bone Wastes in Terokkar Forest. He is known as <The Bone Emperor>.

Hai'shulud has a lot of health and a highly-damaging poison spit, but can easily be soloed by level 70 characters in decent gear. Lower-level characters capable of healing can pull him to the nearby draenei Vindicators, who will help kill him. Remember to keep them healed, though, because Hai'shulud can easily kill them otherwise.