Half-orc is a term used to describe the offspring of an orc or half-orc parent and a parent of any other species. Since the beginning of the First War, orcs have interbred with a number of species: mostly humans, but half-ogres and half-draenei are not unheard of.[1][citation needed]  It most often refers to a half orc/human, but can also be used to refer to a half-orc half-ogre, or half-orc half-draenei.

Orcs and humans can interbreed, and in this union create half-orcs. Humans and orcs have been enemies for decades and half-orcs represent something both races prefer not to think about. The half-orcs' genesis is usually the result of rape, and their appearance — too bestial to be human and too clean to be orc — reminds the parent races of the rift between them and the horrible deeds each has performed on the other. Thus, most humans and orcs ignore half-orcs. Other races are little better, as the human-orc conflict is only one facet of the Alliance-Horde tensions upon which no one likes to dwell. Conversely, some see half-orcs as symbols of unity. Not all half-orcs are born to abused or victimized parents; some are the children of clandestine love.[2][3] Perhaps half-orcs represent what could be accomplished if the races put aside their differences and lived in peace. After all, if humans and orcs, with their history of hatred and bloodshed and wildly different origins, can produce viable offspring, perhaps the races are not as different as they think.

Half-orcs face mixed reactions. Even more so than half-elves, half-orcs are the targets of rage and derision brought about by stress. Azeroth is a violent place and tensions thrum like taut wires. The Third War lives in recent memory, and most humans and orcs lost loved ones at the hands of the other side. Half-orcs find little welcome, though the situation is better in the larger, more enlightened settlements.

Unlike half-elves, who prefer to wander or blend in to avoid prejudice, half-orcs are vocal, daring, and foolishly brave. A product of their parent races' pride, courage, and ferocity, half-orcs refuse to accept bias lightly. They demand attention. Half-orcs commit to audacious dares and acts of suicidal bravery to prove their worth to their parent races. Occasionally they succeed.[4]

Half-orcs, because of their mixed-breed nature, have an outsider's perspective on events; it seems unlikely that they will see things from the inside any time soon. Their unfortunate status as human-orc crossbreeds leaves them truly belonging to neither race, and forces them to find their own places in (usually) the Horde or (more rarely) the Alliance.[5]

A half-orc in "Horde Races" by Chris Metzen. (RPG) 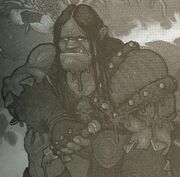 Half-orcs take the naming practices of the race in which they were raised. Half-orcs raised in human lands often take orc first names to display their heritage and vice versa.[6]

"Half-orcs are a bit taller and heavier than humans, standing around 6-1/2 feet in height and weighing 200 to 250 pounds. Males are noticeably taller and heavier than females. Half-orc skin ranges from light green to grayish brown; half-orc hair is coarse like an orc's and ranges from brown to black in color. The orc lineage is unmistakable, but half-orc features are not as pronounced as those of the orc parent. A half-orc's ears are not quite as large, the nose not as piggish, and the tusks just far less. Both humans and orcs view half-orcs as physically ugly, a view which infects some half-orcs with self-loathing. Half-orcs live longer than their orc parents, with life spans equivalent to a human's."[6]

It appears orc traits are generally dominant when it comes to interracial breeds as evidenced by Mok'nathal, Half-draenei, and Orc/Human hybrids.

Since many half-orcs belong to the Horde, they study the shamananistic practices of their orc forebears. They find the spirits more accepting then any race in society or in the physical plane for that matter. Half-orcs also curious about the Holy Light, and those raised among humans may follow this philosophy.[6]

If raised by humans, a half-orc most likely makes Theramore or Stormwind his home. If raised by orcs, he probably comes from the city of Orgrimmar in Durotar.

Lands of Conflict mentions that about 3% of the population of Hillsbrad Foothills is half-orc (human/orc). This means that there are roughly 450 half-orcs in the area.[7]

Half-orcs of ogre descent, the mok'nathal live in the Mok'Nathal Village in Outland.

Other types of half-orcs 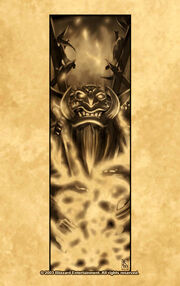 The term half-orc is usually used to describe the union between a human and an orc, however, there are other half-orc hybrids:

The Mok'Nathal are usually referred to as a type of half-ogres, rather than half-orcs, due to more dominant ogre traits. The famous Rexxar is one well-known half-ogre. Sometimes the longer term "half-orc half-ogre" or "half orc/ogre" is used to describe the race, half-ogre being the short form. In Beyond the Dark Portal, Rexxar is simply called a "half-orc" throughout much of the book.

A hybrid of an orc and a draenei can be called a "half-draenei",[1] a "half-orc half-draenei", or an "orc-draenei half-breed". Brann believes that they show draenei physical traits.[8] Half-draenei is used as the short form. Garona has been called simply "half-orc" in several sources as well.

It appears that what half a character is called at any given time depends on which heritage is being focused on, as is the case of Rexxar and Garona being called "half-orcs" at times.

Traditionally, in classic fantasy settings such as the works of Tolkien and later in D&D, a half-orc by definition means an offspring that includes an orc and a human parent.[9][10]

For example, in Tolkien's works, half-orcs were the creations of Saruman — between men and orcs:

"But these creatures of Isengard, these half-orcs and goblin-men that the foul craft of Saruman has bred, they will not quail at the sun...'"

This traditional view was used when Warcraft: Orcs & Humans was released, Garona stating in her own words that she was the product of a human and an orc union. It was later mentioned that both humans & orcs thought that she was half-human and half-orc[citation needed] [11] or at least near-human. It has been confirmed that she is half-orc, half-draenei.[12]