For other uses, see Hall of Arms (disambiguation). 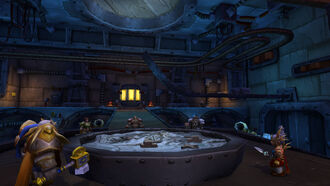 Main chamber of the Hall of Arms

The Hall of Arms is the command center of dwarven military power in the Kingdom of Ironforge and serves as the headquarters of the city's armed forces. It additionally houses trainers for warriors and hunters, as well as several important battlemasters. The Hall of Arms can be found in the Military Ward, Ironforge's southeastern district.

The Hall doubles as a major arsenal for the city and the kingdom. Supplies and, more importantly, vehicles can be seen stored in large quantities. Here, assembled flying machines are constantly launched from access ports in the roof and sent to the Ironforge Airfield just outside the city. Steam tanks are also assembled and maintained within the complex for use by Alliance forces in the field. 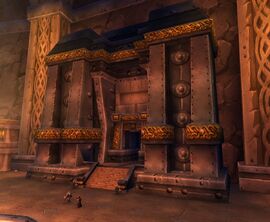 Entrance from the Military Ward