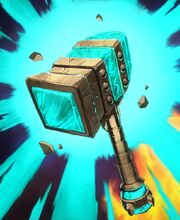 The hammer as seen in Highmountain: A Mountain Divided. 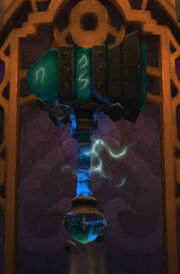 The Hammer of Khaz'goroth in-game. 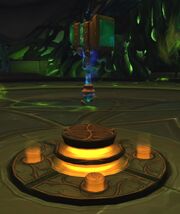 The Hammer of Khaz'goroth in the Tomb of Sargeras.

The Hammer of Khaz'goroth is one of the Pillars of Creation, which forged ancient wonders and shaped the earth itself.[1]

It can turn drogbar into elemental furies,[2] and destroy towns by reshaping the stone under them.[3][4]

During Azeroth's ordering, the Pantheon bestowed the Pillars of Creation to the titanic keepers to aid them with that colossal task. Ages after the keepers had completed their work, the Pillars would become lost and scattered across the lands of Azeroth.[5]

After the Highborne found the Pillars while hunting artifacts throughout Ancient Kalimdor, they guarded them in the Vault of Antiquities in Suramar. During the War of the Ancients, Grand Magistrix Elisande and her allies in Suramar, opposing Queen Azshara, used the Pillars to stop the Burning Legion from creating another portal in the Temple of Elune.[6] After their success, Neltharion acquired it somehow, and stored it in his lair. After the War of the Ancients, Huln Highmountain and an uprising of Deathwing's drogbar slaves battled the Earth Warder, and Huln used the Hammer of Khaz'goroth to banish Deathwing from the land.[7]

Ten millennia later during third invasion of the Burning Legion, the Hammer of Khaz'goroth, which had since been guarded by Huln's descendants, the Highmountain Tribe, was stolen from The Hammer's Cradle by the drogbar leader Dargrul the Underking who intended to use its power to take control of Highmountain.[8] In the end, Dargrul was killed and the Hammer was retrieved. It was then secured in the Portrait Room in Dalaran.

Along with the other Pillars, Khadgar used the Hammer's power in conjunction with

[Light's Heart] to return Illidan Stormrage's soul to his body during the final battle with Gul'dan.

In order to close the Burning Legion's portal at the Tomb of Sargeras, the Hammer of Khaz'goroth and the other Pillars were placed inside the Tomb.

It is unknown how the Highborne obtained the Hammer of Khaz'goroth, since it appears it was in the possession of Neltharion and was only taken from his vault by Huln Highmountain after the final battle at the Well of Eternity and the defeat of the Legion.[9]