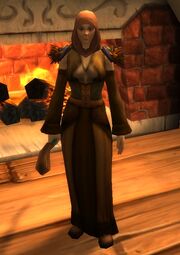 Harvest-witches[1] are humans gifted with minor control over nature. They are not widespread, and live on the fringes of Gilnean society.

In the early days of humanity and its civilization, many tribes of humans had primitive belief systems that incorporated simple nature magic, practicing crude forms of druidism and shamanism.[2] However, the rise of organized religion such as the Holy Light and the potent arcane magics introduced by the high elves quickly supplanted such traditions. Gilneas, due to its relative isolation, retained a degree of their ancient culture in the contemporary era. The religious leaders of what was in Gilneas referred to as the "old ways" eventually became "harvest-witches", those who used their nature powers to augment Gilneas' agricultural output during and following its period of industrialization.[3]

Due to the presence of harvest-witches in their culture, when Gilneans learned about night elf druids (albeit through second, third and even fourth-hand sources) they became fascinated by them and their exotic connotations, to the point where many started referring to harvest witches as "druids", though this was quite far from the truth, as few Gilneans had any idea what a druid actually was. Harvest-witches have a limited control over nature, especially plant life, and the powers of harvest witches bear a coincidental resemblance to the low-level abilities of actual druids.[3]

King Genn Greymane had heard that "druidism" was practiced among some of Gilneas's agrarian folk, but he hadn't been exposed to it until recently.[4] Indeed, the Gilnean "druids"[5] were driven to the edge of extinction once before, but when famine struck Gilneas and their crops failed, the keepers of the old ways called upon the earth's blessing and restored the harvest.[5]

Harvest witches who contracted the worgen curse, which was druidic in origin, found that their powers were somewhat amplified, and after making first contact with the night elves, cursed harvest witches were offered induction into the Cenarion Circle for both study and training.[3] Birch Tomlin refers to himself as a druid as well as being referred to as a harvest-witch, meaning the two have likely become synonymous.[6]