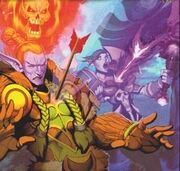 Havoc in the TCG

Havoc is an extremely important ability for Destruction warlocks, allowing them to copy single-target spells to an additional target for the duration. Havoc should be used on cooldown whenever there are 2 or more targets to attack. Havoc should ideally be used to copy a Chaos Bolt or, if one of the targets is below 20% health,

While the primary target of Shadowburn must be below 20% health, Havoc can duplicate Shadowburn's damage onto a target that is not below 20% health. This tactic, sometimes called "Shadowburn cleaving", is useful in raid encounters as it allows you to execute a dying add while also doing extra damage to the boss through Havoc and still gaining the benefit of the refunded and extra Soul Shards. In the encounters where it is possible, mastering Shadowburn cleaving is a very significant DPS gain.

Shadowburn cleaving can also be used in PvP to finish off a dying opponent while dealing damage to their ally and giving yourself an additional Soul Shard to use to damage the survivor.