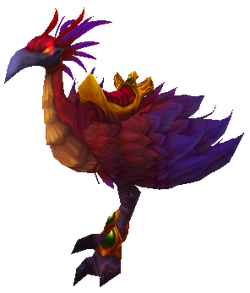 “Some of our brethren prefer horses, but the hawkstrider will always be the true symbol of Silvermoon.”

The hawkstrider is a large flightless bird that is the blood elves' racial mount. As their name implies, hawkstriders resemble the tallstrider family, though their plumage is both larger and more vibrant. They come in a variety of bright colors and have a thin, curved beak and burning orange eyes. Epic versions include decorative armor on the chest and head. The hawkstrider's movements exhibit the same rhythmic, back-and-forth motion which characterizes the other two-legged mounts. They use a heavily modified tallstrider model, but they possess a wildly different looking exterior and a unique standing-jump and running animation.

When Kael'thas led his followers to the ruined world of Outland, the vibrant hawkstriders that were brought with them proved to be welcome reminders of the blood elves’ beauteous home in Quel'Thalas. Valued for their trustworthiness and speed, these colorful avian creatures embody the inherent splendor of the forests within the blood elven kingdom. While tragedy has befallen Quel’Thalas in recent years, the hawkstriders remain an integral part of the elves’ day-to-day lives.[2]

[Egbert's Egg] is a possible reward from