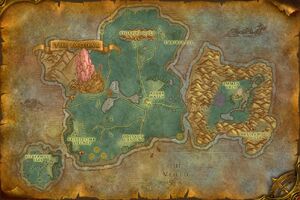 Disperse the Neutralizing Agent at the Irradiated Power Crystal, then return to Botanist Taerix at the Crash Site in Ammen Vale.

Thank goodness, I think it'll work! I have an agent for you to spread at Silverline Lake to the south. It will neutralize the effects of the irradiated ship's power crystal that fell there.

Swim out and scatter the neutralizing agent near it. Don't worry, you won't be exposed long enough to become irradiated.

The sooner you disperse the agent at the lake, the fewer native creatures that will be mutated by drinking the water, including ourselves!

I'm sorry that we can't do anything to help the poor creatures that have already been infected. If only my lab equipment were intact.

As the neutralizing agent mixes into the waters of the lake, the water that was irradiated by the crystal seems to clear.

From what you describe, the neutralizing agent worked! I just wish that I knew how long it will last; we really need to remove that power crystal from the lake entirely.

Thank you, <name>! I will tell Tedon to try the neutralizing agent on one of the captured beasts at once.