Hearthglen is a fortified town and former principality[1] in the northern area of the former kingdom of Lordaeron, located north of Andorhal, in an area now known as the Western Plaguelands. The town stands out from the rest of the region for its peaceful appearance, although it has not been spared from the attacks of the Scourge.[2]

The town and formerly the region, was controlled from Mardenholde Keep. It fell under the control of the Scarlet Crusade until Tirion Fordring returned and resumed control. It now serves as a training ground and headquarters[3] for the Argent Crusade.

Hearthglen is a sturdy fortress, its walls encircling a town hall, a mage tower, a lumber mill, a blacksmith, stables, a scout tower and a mine besides its keep. The road to the town is called Hearthglen Pass,[4] and a forest near Hearthglen is called the Hearthglen Woods.[5]

During the Second War, the keep never fell to the Orcish Horde. Some time before the Third War, traveling dignitaries and representatives from the various nations of the Alliance passed through Hearthglen on their secret diplomatic errands.[6]

Before the Third War, Hearthglen was ruled by the paladin Tirion Fordring, Lord of Mardenholde. He was, however, excommunicated and exiled for treason, for giving aid to an orc found in his lands, Eitrigg. The paladin Barthilas was temporarily given command of the province, but he was wounded during an orc assault on Stratholme, and was not able to make his command effective. Some years later, Tirion's son Taelan Fordring was given control of the keep.[7]

Hearthglen was a target of the Scourge in the beginnings of the Third War. The Plague of Undeath arrived there in a grain shipment from Andorhal. The city was about to be attacked by an army of undead, and the defenders had just baked and eaten the grain before the attack started. Meanwhile, Prince Arthas had tracked the shipment of grain to Hearthglen. He, along with soldiers of Lordaeron's army, were able to slay those infected by the shipment before they could spread the disease to the entire town. Shortly thereafter the large undead army laid siege to the town. Reinforced by Prince Arthas and his armies, the town held off the undead long enough for the arrival of Uther and his knights. Ironically, it was the efforts of the future Lich King that saved Hearthglen and ultimately allowed it to survive uncontrolled by the Undead Scourge.[2]

Hearthglen was later used as a rallying point by the remains of the Order of the Silver Hand, due to Taelan Fordring's offer for refuge. During a Scourge attack, High General Abbendis died here.[8]

The town was later appropriated by the Scarlet Crusade, who turned it into a major base of operations. Kirsta Deepshadow was sent to gauge the strength of Hearthglen's defenses. She was to infiltrate the town but was injured, so she accepted the help of Alliance adventurers to assist her at Hearthglen Pass and inside Hearthglen as well.[9][4][10]

Prior to the Battle for Light's Hope Chapel, High Commander Galvar Pureblood assembled a host of Scarlet armies in Heartglen and the surrounding area to aid the Crusade at the Scarlet Enclave east of Tyr's Hand, along with crusaders from Tirisfal Glades; the combined Scarlet armies were destroyed by the Scourge shortly thereafter, after they were led into a trap by the Lich King and the death knights of Acherus.[11][12]

When Tirion Fordring returned from Northrend, he resumed the command of Heartglen. The area is now controlled by the Argent Crusade and serves as a training ground for its forces. The priest Daria L'Rayne was preserving the peace in the town.[13] Recently, supplies from the town went missing, and Daria along with an adventurer discovered them among the Redpine gnolls at Taelan's Tower. Eventually, they found out the culprit, Magus Bisp, one of the town's most preeminent arcanists.[14][15][16]

During the Burning Legion's third invasion, Hearthglen was attacked by a small demonic forces. The town was successfully defended by the forces of the reborn Order of the Silver Hand,[17] who also recruited Sir Alamande Graythorn, a noted scholar from the Hearthglen archives.[18]

After the death of Tirion Fordring, it is unclear who governs the town. Following the Fourth War, the keep of the city serves as a training ground for the troops of the Argent Crusade.[19]

To reach Hearthglen, follow the path north starting at [50, 42] 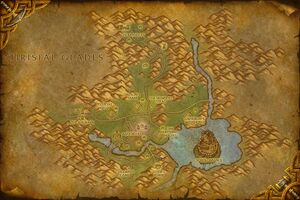 in the Western Plaguelands. The gates of Hearthglen are at [48, 21]

Tirion Fordring once oversaw Hearthglen, a quiet rural community. Now the town is the Western Scarlet Crusade's military headquarters. Fanatical warriors and priests man Hearthglen's walls and patrol the nearby territory, so crazed in their beliefs that they attack anyone they think carries the plague — which is pretty much everyone. Tirion's son, Taelan Fordring, supposedly controls the town, but Grand Inquisitor Isillien manipulates him easily.[20]