The Hearthsteed, a mount rumored to be chiseled from the same rare mineral as the

[Hearthstone] itself, bears a striking resemblance to every adventurer's most useful item. A construct of exquisite craftsmanship awash in a mystical blue glow, its rocky exterior just barely manages to contain the power that lurks within! When you’re ready to take to the skies, this epic flying mount manifests ethereal blue wings, ready to carry you off to your next adventure.[1] 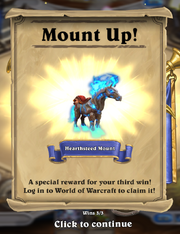 Earning the mount in Hearthstone

This mount is granted through playing the free-to-play Blizzard collectible card game Hearthstone. Winning 3 games in either Play or Arena mode will grant the player the Mount Up! achievement in that game, unlocking the Hearthsteed for that player in World of Warcraft. Players will receive a letter from Mei Francis in Dalaran with the mount attached:

This fine magical construct arrived only yesterday, and you were the first adventurer I thought of.

Each step echoes with the rage of your three opponents.

Owning this mount awards the

Hearthstone has already been featured in World of Warcraft through the introduction of in-game Hearthstone tables at the Shrine of Seven Stars and the Shrine of Two Moons in the Vale of Eternal Blossoms. These tables were speculated to be intended for future cross-play, allowing players to seamlessly enter Hearthstone while playing World of Warcraft, since Hearthstone production developer Jason Chayes had indicated "there's always that possibility in the future."[2] To date, however, the tables remain decorations only.

This mount represents the first significant and rewarding tie between the two games.

Ride Into Action on Your Hearthsteed! (Official Trailer)