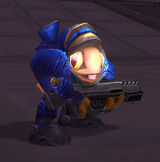 Grunty showing off his rifle. 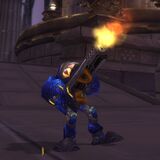 Grunty firing into the air.

Grunty the Murloc Marine is a companion that was given out to attendees of BlizzCon 2009, purchasers of the DirecTV pay-per-view of the event,[1] and purchasers of the internet streamed video of the event.[2] This baby murloc wears Terran Marine armor and wields a gauss rifle, which he'll occasionally fire around at perceived enemies.[1]

Grunty will be delivered by in-game mail to every character on a player's Battle.net account that has been attached to a Grunty code, much like collector's edition companions. If you merged your World of Warcraft account with your Battle.net account after purchasing the stream, you will not get the pet.

The letter delivered with Grunty is from Master Handler Sylvester:

Thank you for your attending BlizzCon 2009! As a special gift of appreciation, we would like to present you with this small, heavily-armed friend. May he lead you to new adventures across the face of Azeroth and beyond!

Only the rarest of murlocs is able to successfully cross dimensional barriers. Fewer still return with the kind of advanced armor and weaponry possessed by Grunty.

The Grunty hero in Blizzard DOTA.

Grunty Murky in Heroes of the Storm.