This article is about the original 40-man version of Heigan introduced in Patch 1.11. For the 10 and 25-man versions of the raid boss introduced in Wrath of the Lich King, see Heigan the Unclean.

Tunnel before Heigan the Unclean 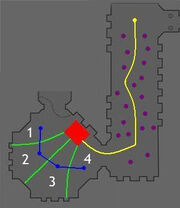 How to do the Heigan Dance

The fight goes as a 135 second cycle:

(4/19/08)Heigan is, and has been, experiencing a raid-blocking glitch wherein he phases through the floor in his room and lands on the mountains below the instance, well out of playable range. Keep in mind that he can still trigger Eruptions and can still kill those standing on the platform during P2. Blizzard has yet to acknowledge this bug, let alone attempt a hotfix for it. It can be fixed temporarily by:

Phase 2
The end is upon you.