"Let the fire sear my flesh, so long as it burns my enemies as well."[1]

Hellfire is a channeled PBAoE Demonology warlock spell, which ignites the surrounding area, dealing an equal amount of Fire damage to the Warlock and to all nearby enemies. 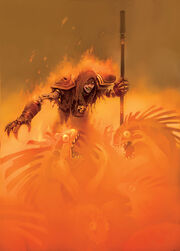 A warlock burning murlocs with hellfire.

A warlock burning murlocs with hellfire in The Burning Crusade intro cinematic.

As a channeled spell, interruptions can shorten the duration, thus reducing the spell's mana efficiency. Effects such as

[Concentration Aura] can be useful to reduce pushback. However, since the spell has no cooldown, it is possible to re-cast it as often as necessary to continue to channel the effect.

If the warlock dies from this spell's effect, they take no durability damage. This allows the warlock to save some repair costs when faced with certain doom. In such a scenario, a warlock will typically use life tap to get low on health fast, then use Hellfire.

Hellfire receives 21% of your spell power per tic, for a total of 294% over the full duration.

This is a great spell to use with an experienced healer, if you're not being focused on, and in large groups of enemies. Once started you deal out tremendous damage but also receive as much. Compared to other AoEs, Hellfire is incredibly mana efficient, not taking into account the mana needed to heal. A popular combo is warlock/priest since

[Power Word: Shield] minimizes channeling time lost, and if combined with other AoEs, mobs die fast and the warlock is never in danger of dying.

Warlocks are unable to resist the damage that Hellfire does to themselves.

If you predict a Cat Druid's or Rogue's attack, you may break his stealth with a timely use of Hellfire.