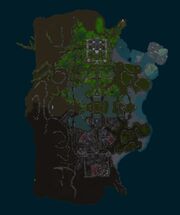 Heroes Through Time was a battleground that was never released. It was scrapped during early development of Warlords of Draenor as it never reached a point that Blizzard deemed satisfactory.

It was presumably scrapped to focus the efforts on Ashran.

Not much is known about the battleground apart from its layout. It was an island surrounded by sea on all sides. An orcish fort on one end of the island, and a human fort on the other end.

The Alliance side was relatively lush, with a giant tree, the size of a World Tree, up in the mountains. The Horde side, on the other hand, was more desolate, with ashen ground and scorched trees. A peninsula, behind the Horde fort, jutting out into the sea featured a gilnean lighthouse. Similarly, a lighthouse like the one found at Lunarfall was found near the Alliance base. The beach near the Alliance fort featured a few night elven ruins, sunken halfway into the sea. Goblin structures were located on both sides near the center of the battleground. The island also had a cave.

Throughout the battleground, many large or downright enormous ogres were placed, presumably either as size scales or placeholders of some sort.