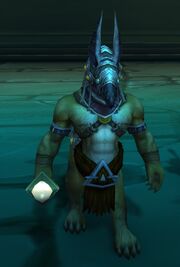 Amet in World of Warcraft.

High Priest Amet is a Ramkahen tol'vir and is apparently is the leader of the Ramkahen's religious sector called "The Faith of Ramkahen". As such, he is also the sector's representative in the "The High Council", the ruling authority of the Ramkahen under King Phaoris.[1] Having the ability to read the future in the Vir'naal Lake's waters, he can be found inside the Vir'naal Dam in Uldum where he is looking at the water through a window. He there acts as a quest giver. He is accompanied by two Vir'Naal Priests.

During the Assault in Uldum, he is found back in Ramkahen near the king. He also appears in the Vision of the Twisting Sands.

Your future holds many darknesses, <class>. Tread carefully among them.

Vision of the Twisting Sands

There is still hope.

Amet appears as a legendary card for the priest class in the Saviors of Uldum expansion for Hearthstone. His flavor text reads: "All minions are equal, but some minions are more equal than others."