High Priestess Jeklik was the Zandalari[1][2] High Priestess of the Primal Jungle God Hir'eek, the Bat. Sent to Zul'Gurub to stop Hakkar the Soulflayer, she was eventually turned by the blood god and had to be slain at the Zandalari's behest.

In order to quell Hakkar the Soulflayer, King Rastakhan sent a contingent of Zandalari High Priests into the ancient city of Zul'Gurub. Each priest was a powerful champion of the Primal Gods, or loa, but despite their best efforts, they fell under the sway of Hakkar and were forced to channel power into the blood god. Ultimately, Jeklik and the other priests were slain by the adventurers who entered the city, and killed Hakkar.[1]

Several years later, the shade of Jin'do recovered the body of High Priestess Jeklik and the other High Priests. He enlisted the aid of Zanzil the Outcast to resurrect them in the service of Hakkar. Agents of the Zandalar Tribe attempted to stop the ritual and managed to destroy the body of Jeklik, but they failed to prevent Venoxis from being successfully restored to life as Hakkar's slave.[3] 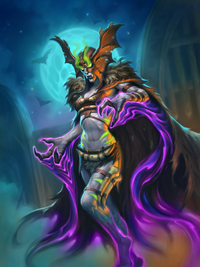 In the Hearthstone expansion Rastakhan's Rumble, Jeklik serves as the champion of Hir'eek's Bats, a team of sinister troll warlocks, and appears as a legendary warlock card. Her flavor text reads: "If you love Jeklik, set her free. YOU CAN'T GET RID OF HER."