High Sage Viryx is the arakkoa leader of the Adherents of Rukhmar after betraying her former clutch-brother Iskar. 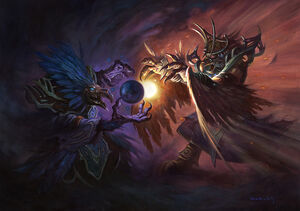 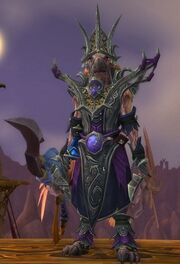 Before she became the High Sage of the Adherents of Rukhmar, Viryx was a novice adherent, who at birth was paired with the hatchling Iskar. Viryx showed much potential to become one of the greatest sages of Skyreach, however, her curiosity and rebellious nature proved a great obstacle for that fate. So much that she had usually gotten herself and Iskar into trouble. Although Viryx was always the one responsible for the clutch-brothers' troubles, High Sage Zelkyr had favored her too much to actually give her any real punishment, while her clutch-brother received the brunt of the High Sage's wrath. One afternoon, as they were pursuing a ravager, Viryx and Iskar had stumbled themselves near an Arakkoa Outcast village. Here they witnessed an Adherent conversing with one of the Outcasts. Despite Iskar's pleas to return to Skyreach, Viryx followed the Adherent, hiding above the trees. The Adherent asked the old Outcast, Reshad, for a scroll. Viryx tried to get closer when the branch she was perched on snapped. Viryx locked eyes with the Adherent for a moment and then he took off. Viryx pursued him and managed to slam him to the ground. The Adherent, revealed to be Ikiss, quickly rose back to his feet and created a ball of flame at his talons, accusing Viryx as a spy of the High Sage. Not long after, four bladetalons were closing in on him, and in panic, pinned Viryx to the ground, telling her that everything she knew of the Talon King, Terokk, is a lie. The bladetalons incapacitated him, and Iskar landed beside Viryx, helping her to get up.

The clutch-brothers were taken by the bladetalons to the High Sage, where they were given their punishments. He had Viryx locked in her home for 3 days, while her clutch brother was to be wiped with fire for 3 days by the High Sage himself. When she was released, Viryx was anxious to find out more of Ikiss's cryptic words. For two days, she isolated herself from all the others, promising that she would not involve her clutch brother in this. She researched everything she could about Terokk, delving into the forbidden archives of the Adherents of Rukhmar. Unbeknownst to her, Iskar had been spying on her, as ordered by Zelkyr, worrying that she was falling to the Curse of the Outcasts. Iskar had met with Zelkyr after two days and reported his findings. However, he lied about Viryx possibly being cursed. At first, he felt happy that he was able to buy Viryx more time, but he soon realized just how dangerous his actions were. Fearing for Viryx and himself, Iskar flew to Viryx's roost, and demanded an answer for the last two days she was isolating herself.

Iskar told her everything: the High Sage's orders, his spying of her, the Curse of the Outcasts, and his lying to the High Sage. After everything she had heared, she believed that Iskar deserved to know. She told him about what Ikiss had told her and what she's learned so far of Terokk. Finally, she told him about her plans to talk to the Outcast, Reshad, and find out the truth about Terokk. Iskar pleaded with her to forget all of this, but she became so annoyed and betrayed by him that she spoke out against him. Iskar angrily replied that, for once, she should think about the consequences of her actions. About how much they affect others. She retorts, saying that she didn't ask for him to lie for her. They eyed each other for a moment, and seeing the pain in Iskar's eyes, Viryx regretted about what she said, but before she could apologize, Iskar stormed out of her roost.

On the day of Ikiss's exile, all the arakkoa gathered at the highest spire to witness his banishment. This was the perfect opportunity for Viryx to travel to the Outcast village, and find out about the truth. Once she entered Reshad's hut, she spoke the words Ikiss said to make Reshad appear. She did so, and Reshad had appeared, surprised that the Adherents' spy had returned. She drew her bone dagger and placed it under Reshad's throat, demanding that he had over the scroll Ikiss was looking for. To her surprise, Reshad had also drawn his dagger, and poised it to her chest. Reshad demanded that she leave or else they will both die. Looking for a way to make him surrender the scroll, she found his pet kaliri fledgeling, and grabbed it, threatening to squeeze the bird to death. In desperation, Reshad gave in and surrendered the scroll to her. Unknown to her, Iskar had been following her, and he pleaded with her to come home. They left the village as soon as possible.

In her roost, Viryx and Iskar stared intently, fearing its contents. After a while, Viryx opened the scroll, and they read the truth of Terokk's reign and fall, and the truth of Outcasts' curse. Viryx realized just how much this would change life in Skyreach. She envisioned herself living with the vile and accursed outcasts atop the Spires of Arak. She despised the thought. After a moment of silence, Viryx told Iskar that they should burn the scroll. Iskar was surprised by this and told her not to. She proceeded otherwise, and took the scroll. Iskar tugged at the scroll, and they fought over it. Although Iskar fought hard, Viryx was the stronger of the two, and she threw him of his balance, and burned the scroll. Not long after, a kaliri perched outside Viryx's home screeched. High Sage Zelkyr and some bladetalons flew to her roost and entered, witnessing the aftermath of the fight. Zelkyr had the bladetalons drag Iskar away, while he talked to Viryx. He told her that he knew about everything. Her research on Terokk, Iskar's lying, her plans to go to the outcast village. He had his kaliri spy on them. Viryx questioned him that if he knew everything, why didn't he punish them sooner? Zelkyr told her that he was waiting to see how they would react to the truth, and they reacted just how he knew they would. However, he realized something over the course of these events. He always thought that Viryx would learn her mistakes across her life, when in fact, she must be thought realize these mistakes. Zelkyr ordered the bladetalons to bind Viryx, and had her head covered with a sack.

Zelkyr later had her imprisoned in the most secluded, coldest, and the darkest chamber of Skyreach, where she remained there for what seemed like an eternity. When she was released she was brought to the High Sage's balcony, where she was allowed to bask in the light of the sun. Then, Zelkyr appeared and gave her a scythe. Zelkyr ordered Iskar to be brought forth. Here, Zelkyr gave Viryx a choice: exile her clutch-brother and bask in Rukhmar's glory forever, or join her clutch-brother and the rest of the outcasts below.

Iskar stared at her in anger and hatred. He knew what was to come, and he faced without fear. Finally, Viryx made her choice. Viryx shredded off Iskar's wings and she pushed him off the cliff, and into the Sethekk Pools.[1]

Viryx was the one behind the re-creation of the Breath of Rukhmar and the purging of the Arakkoa Outcasts.

She was ultimately slain on the orders of Reshad, Khadgar, the Alliance and the Horde by the garrison commanders.[2][3][4]