Highmaul is the capital of the Gorian Empire and a raid instance introduced in Warlords of Draenor which opened on December 2, 2014. It features 7 bosses,[1] and serves as the first raid of the expansion. The entrance is in western Nagrand. It is ogre-themed, showing them at the height of their civilization. The layout of the instance is nonlinear, allowing groups to select their own path of progression.

Highmaul is the seat of power for the Gorian Empire, the ogre civilization that ruled Draenor for generations, until the arrival of the draenei. A massive city that belies the ogre reputation for brutish stupidity, Highmaul is full of bustling markets, wealthy nobles, and the roar of the Coliseum crowd echoing through the streets of the slums. Visible from everywhere within the city's walls, Imperator Mar'gok's citadel casts a long shadow, a reminder of his watchful eye and iron grip.

As ogres and Iron Horde leaders gather for a spectacle in the great arena of Highmaul, a destructive plot roils in the shadows.

Only a select few have seen the inside of the Gorthenon atop Highmaul: rumors abound of strange relics and sorcery within.

Atop Highmaul, Imperator Mar'gok works to unlock ancient secrets so that the ogres may reclaim their birthright as lords of Draenor.

The instance line and summoning stone for Highmaul are at [34, 38] 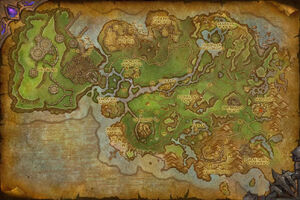 in western Nagrand, between Mok'gol Watchpost and the Ancestral Grounds on the east coast of the big island. The nearest flight path is at [50.8, 30.6]

at Rilzit's Holdfast, eastward along the northern road.

The gear from Highmaul starts at item level 640 for Raid Finder mode, and increases by 15 item levels for each increase in difficulty. Each piece of loot has the chance to be Warforged, socketed, or contain a bonus stat. Warforged items are automatically 6 item levels higher than their regular versions. In addition to gear, players on the legendary ring quest line have a chance to receive Abrogator Stones from each boss kill.