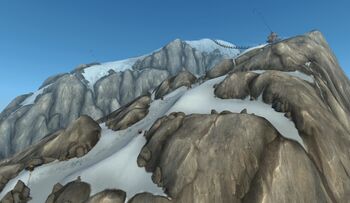 Highmountain Peak (or Highpeak)[citation needed]  is a large mountain located in southern Highmountain. It is the highest point in the Broken Isles. The mountain's trails and outposts are maintained by the Skyhorn tribe. Only two settlements can be found on Highmountain Peak: Greystone, and the secluded Ironhorn Enclave.

The mountain is composed of three large, snow covered peaks with two valleys in between them. The center peak is the highest. Many cave systems run beneath the mountain, including Neltharion's Lair. As the altitude gets higher, most of the vegetation cannot survive so the mountain is mainly comprised of a light grey colored rock and snow.

A trail ascending the second peak.

Only one small path ascends the mountain. Buffeted by howling winds and covered by thick snow, the trail is seldom maintained. It starts at Summitcrest Basecamp, found in the Snowblind Mesa. As it ascends you pass a drogbar controlled settlement called Greystone. The path continues up the mountain, winding along cliff faces. It reaches the top of the first peak at Frosthoof Watch, and a large bridge spans across to the next peak. After the bridge the path splits in two. To the left it leads down to Ironhorn Enclave, and continuing straight will lead to the rest of the mountain. Progressing straight, the path passes the highest point of the mountain; a small piece of weathered parchment acknowledges this. The path continues to another bridge called Sanderhorn's Span. Which leads to the final area of the peak, Highmountain Summit.

The most notable wildlife found on the mountain are the Highpeak Goat and Snowfoot Fox. Snowshoe Hares and Northern Hawk Owls can also be seen however they are not as common.