This article is about the human town before it was destroyed. For its current status, see Sludge Fields. For the zone is located, see Hillsbrad Foothills. For other uses, see Hillsbrad (disambiguation).

The Hillsbrad Fields refers to the area which included the town of Hillsbrad and a large and fertile cultivated area that provided food for the people of Southshore and the whole of Hillsbrad Foothills. 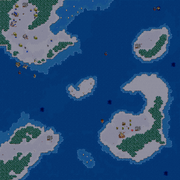 The Horde prepares to assault the town of Hillsbrad and its forces.

Early during the Second War, the Horde began construction of facilities to support the deployment of its armada within the Southshore region. Zul'jin's axethrowers and destroyers were eager for revenge on the humans who imprisoned them and assisted in preparation for the assault on Hillsbrad.[1]

Meanwhile, Alliance scouts had discovered an orcish secret base in the Zul'Dare region of the Channel Islands, south-east of Hillsbrad. Admiral Daelin Proudmoore ordered for transports to land troops against the outpost.[2] At the same time, Doomhammer ordered the assault on Hillsbrad, which was destroyed in a gruesome display in order to make an example.[3] Hillsbrad was decimated, and the news spread throughout the human kingdoms.[4]

Hillsbrad and Southshore were the only regions of former Lordaeron that were not left completely devastated by the Third War or joined the Scarlet Crusade. As such, guards from both communities were still wearing the tabard of their kingdom.

Magistrate Burnside led the town of Hillsbrad from the local town hall, aided by the Council of Hillsbrad, as well as Clerk Horrace Whitesteed. The Hillsbrad Fields laid in the western part of the Hillsbrad Foothills, east of Darrow Hill, north of Azurelode Mine, and south of Dalaran.

The farms' economy appeared to be based around apple production, however the southernmost orchard produced something else. There were also pumpkins and cows to be found scattered around the fields. Azurelode Mine was also still being exploited by the people of the town.

The people of Hillsbrad were constantly threatened by the forces of High Executor Darthalia at Tarren Mill, being repeatedly attacked in the questline

[24] Battle of Hillsbrad by the forces of the Forsaken. Peasants, farmers, and other members of the human supply line and infrastructure were especially threatened. Many of the farmers were very capable of fighting back, and staged ambushes on the undead forces, according to the quest

[28] Dangerous!. Blacksmith Verringtan and his apprentices supplied weapons to the local militia.

The Hillsbrad Fields were seized by the Forsaken, complete with searchlight towers and plague tanks, and are now called the Sludge Fields. Before the town was taken, some of the former human residents of Hillsbrad fled to escape the fighting. Some attempted to venture east to the Arathi Highlands but they never made it, slaughtered before they reached Thoradin's Wall. Some others traveled west into Silverpine Forest, to take refuge on Fenris Isle. Magistrate Burnside and a few dozen Hillsbrad residents stayed behind to defend the town but were ultimately defeated, imprisoned, and experimented on.[7]

In the town hall

Three Apprentice Blacksmiths sold assorted weaponry. They were directed by a man named Verringtan. Two Tailors, vending assorted clothing, inhabited a small house on the far side of the southernmost orchard.

In the spirit of Hillsbrad Foothill's infamous PvP battles, Horde players needed be careful while completing the

[24] Battle of Hillsbrad quest. It was a known spot for high level Alliance ganking.

Hillsbrad is a large farming community that is governed by Magistrate Burnside. This community wants to peacefully coexist with its neighbors, though it views the Horde settlement at Tarren Mill as a constant threat. Hillsbrad was always a rival to the farm towns where Aretain Naris grew up, and that rivalry has turned into enmity. Aretain's open contempt for Hillsbrad is reciprocated. Some worry that Aretain may attempt to force out Magistrate Burnside, take control of the town, and establish it as his base.

A mysterious sickness afflicts the people of Hillsbrad. The malady involves weakness and bouts of temporary blindness, and affects both humans and livestock. Burnside suspects the Horde is responsible, and offers a reward to anyone who discovers the source of the plague.[8]

The farms: a family holding?

Many of the Hillsbrad farmers, footmen and councilors were redheads. This gave rise to the possibility that the Hillsbrad Fields were privately owned and operated perhaps by a large farming family. It could also have been that the Hillsbrad humans had a dominant redhead gene, considering most if not all of the Southshore Guards were auburns.

[24] Battle of Hillsbrad, the landowners were Farmer Ray and Farmer Getz. Whether these two farmers were related (brothers, father/son...) is undetermined.

A sharp eye could notice that the Magistrate and his clerk were not redheads or auburns like the rest of the Fields. So if the farms were owned by a family, it was likely that they were subject to some degree of outside authority.