The Hillsbrad Foothills (or Hillsbrad Plains)[1] is a large region of the former Kingdom of Lordaeron and is mostly untouched by the Scourge. This beautiful land is torn by conflict and aggressive expansion of the Forsaken, trying to conquer the whole of Lordaeron for themselves, opposed by dwarves of the Stormpike clan allied with Bloodfang worgen of the Alliance. The Forsaken maintain their holdings in Tarren Mill, which is the largest settlement in this region, the dreaded Sludge Fields, where many terrifying experiments are being performed. As the result of their expansion, the humans of Southshore were driven off to Fenris Keep in Silverpine and the town itself devastated by the New Plague.

Due to the plaguing of Southshore, the conversion of the farms into the Sludge Fields and the destruction of Dun Garok, the Alliance lost all their major holdings in Hillsbrad following the Cataclysm. The Stormpike clan attempted a large counterattack from the Alterac Mountains to the north, but their plans were thwarted by Horde heroes and they lost many of their forces.[2] Despite this, by the time of the third invasion of the Burning Legion, the Stormpikes still maintain presence.[3]

During the Fourth War, the region was again at the center of conflict between the Horde and the Alliance, which managed to regain control of the ruins of Southshore, beginning its reconstruction after the armistice.

The land also consists of Alterac Mountains and its surroundings, such as Dalaran Crater and Strahnbrad.

Hillsbrad is traditionally the most blood-soaked battlefield on Azeroth, despite its pleasant, pastoral setting. The southwestern corner of the area, such as Azurelode Mine, used to be part of Gilneas before the Greymane Wall was built.[4] Central Hillsbrad was part of the Kingdom of Lordaeron from at least the 19 BDP.[5] The northern part of this region consists of the chilly Alterac Mountains, where the ruins of the city of Alterac have been claimed by a tribe of ogres and the majestic city of Dalaran was once annihilated by the demon lord Archimonde during the Third War.

After they lost the First War, the people of Stormwind arrived in a grand exodus across the Great Sea to the shores of Lordaeron. These landless refugees then settled near the region of Southshore, pledging their loyalty to the Alliance and stationing their troops in the whole region for the coming invasion of the Horde.[6]

At the outset of the Second War orcish marauders started raiding coastal towns in the area. The newly-formed Alliance of Lordaeron established outposts to prepare themselves for the conflict.[7] During the war itself, the region saw several important skirmishes between orcs and forest trolls on one side, and humans and high elves on the other. The towns of Hillsbrad, Southshore and Tarren Mill all got attacked by the Horde, and Durnholde Keep was raided by Orgrim Doomhammer himself in order free Zul'jin and his war party from imprisonment.[8]

On the onset of the Third War, Thrall gave the order to assemble the orcish clans in order for the new Horde to leave the continent and travel to Kalimdor. They skirmished with Alliance forces and freed Grommash Hellscream and his Warsong clan,[9] later secretly infiltrating Southshore during the night to steal its ships so they could sail to Kalimdor.[10]

Two years following the Third War, Kalecgos came to the area to look for Anveena Teague. In turn, Harkyn Grymstone and his team were tricked by Dar'Khan Drathir to hunt Kalecgos. Kalec, Tyrygosa, and Anveena came to Tarren Mill which was still inhabited by humans and assisted in defense against a Scourge attack led by Dar'Khan.[11]

At some point after that, the Forsaken claimed Tarren Mill as their southernmost holding at that time.

The Forsaken, aided by the Horde, battled fiercely with the humans of Southshore and Hillsbrad Fields that joined the Alliance.

The Syndicate also had presence here, taking over Durnholde Keep. Other enemies that the two factions encountered were the Daggerspine naga, the Mudsnout tribe of gnolls, and the Torn Fin murlocs.

Terrence Fallrook is known to have provided jobs for many of Southshore's residents as he held a monopoly on wine in the region, with his estate being located in the northern part of the area. Darkmoon Faire once set a camp near Southshore. Its members were accused of a murder, but it turned out that Terrence's son, Cedrick Fallrook killed his brother Erik Fallrook. The Faire took revenge and buried Cedrick alive in a graveyard.[12]

Adventurers went back in time to the Old Hillsbrad Foothills in order to stop the infinite dragonflight's effort to sabotage the timelines.

By the time of the Cataclysm, the Forsaken crushed the Alliance at Southshore and Hillsbrad by using the New Plague that rendered the town uninhabitable and forced its inhabitants to flee. Now the expansive Forsaken seek to maintain their holdings in order to conquer the rest of Lordaeron for the Horde.

The Dalaran mages fought against the Forsaken while they rebuilt their city, only to move the city to Northrend to combat the Lich King. What little Alliance activity is left in the region is centered around Dalaran Crater and the "four fingers" of Alterac, where the Stormpike with the aid of their new Bloodfang allies seek to drive out the Forsaken. However, the Horde sabotaged the fingers.

The Burning Legion targeted the Hillsbrad Foothills as one of their invasion points. It was successfully defended by the Alliance, Horde, and Illidari.

Several years after Southshore's destruction, the town has successfully been reclaimed by Alliance forces, and is undergoing the process of cleaning up and rebuilding. According to Mathias Shaw, the Hillsbrad Foothills is rife with the Scourge, worgen, and ghosts.[14]

Though the rest of Lordaeron was ravaged by the Scourge and twisted into a haunted perversion of its former self, the Hillsbrad Foothills largely managed to escape this fate. It remains the best-preserved region of the fallen kingdom, giving travelers a feeling for what the land was like before the Plague. Yet the destructive efforts of the Forsaken threaten this land with devastation. Pine trees dot the ample farmland, and the rolling pastures are frequently crisscrossed with roads leading to the gloomy Forsaken settlements. A river flowing from Darrowmere Lake in the Western Plaguelands runs north to south. There are a few small, empty islands off the southern coast, and one larger one, Purgation Isle.

The Alterac Valley battleground can be found in the zone.

Flight paths from Ruins of Southshore 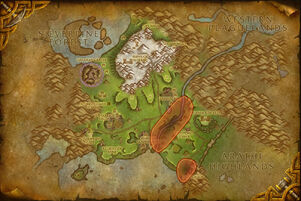 The Hillsbrad Foothills are buffered from the Plaguelands by the Alterac Mountains, and so, Hillsbrad is free from undead influence and is one of the last stable human realms in Lordaeron. This region offers safety and sustenance to a people long beset by misery. Yet Hillsbrad is not completely idyllic. The Syndicate has inveigled its way into the region, and murlocs and Forsaken roam its wilderness.[15] Its hills are green and pastoral, its meadows fertile and its soil rich.[16] Halmish lives here in a small cabin warning people about Silverpine Forest.[17]

Brann Bronzebeard suspected that the necromancer Linnena Hallow was near Hillsbrad Foothills.[18]

Hillsbrad's people fought in the Second and Third Wars, though few Hillsbraders traveled to Kalimdor with Jaina Proudmoore, thinking it dubious that the mysterious continent could hold anything better than their own land. They might be in for a sorry surprise when Kel'Thuzad strikes south. Nevertheless, Hillsbraders have earned their peace and they know it. Recently, Forsaken took over Tarrin's Mill, and the Syndicate, Torn Fin murlocs, and rogue ogres from Alterac moved into the area. The Hillsbraders just want peace, but they are unlikely to get it any time soon. They hate the Scourge for what it has done to Lordaeron, and they are capable warriors with a strong militia.[19]

The Syndicate sent a messenger to Southshore, claiming that they have researched a new spell that is extremely effective against murlocs. They offered to parley with a Southshore representative, trading this new magic for some concessions. Magistrate Maleb did not trust the Syndicate, but the murlocs have been preying on incoming ships and damaging Southshore's economy. He asked some trustworthy heroes to accompany his agent to the meeting with them. The Syndicate did indeed possess such a spell and were willing to part with it for the right price. Unfortunately, the Forsaken of Tarrin's Mill ambushed the Syndicate messenger on his way home and tortured the information out of him. High Executor Darthalia sent agents to the rendezvous point to slay both sides and steal the spell for herself, intending to use it to leverage the murlocs into obeying her commands.[19]

Hillsbrad's people are industrious and proud. They work hard to keep their realm in its current, peaceful state, reporting undead and other dangers immediately. They do not tolerate crime of any sort and punishments are brutal. The locals dress in white, Lordaeron's traditional color. Each year they celebrate Hordefall, the anniversary of the Second War's end.[15]

The Hillsbrad Foothills are located south of the Alterac Mountains and northwest of the Arathi Highlands. It borders the sea to the south.[15] The area is largely peaceful, with numerous thriving farms and one or two large settlements. They offer a land of rolling green hills and fertile meadows. Rich rainfall creates many arable tracts, and this natural bounty aids Hillsbrad's self-sufficiency. The southern shore is windy but gentle, allowing ships to dock easily at Southshore's harbors. Torn Fin murlocs frequent the shores as well. Mountain lions, creeper spiders and gray bears roam Hillsbrad's pastoral landscape.[19]

The eastern-most areas of the Hillsbrad Foothills (including Durnholde Keep and an Alliance naval base) may be considered part of the Arathi Highlands, as Warcraft III indicates that Thrall's camp in a forested area west of Durnholde and east of a river (presumably the one east of Southshore in World of Warcraft) is within Arathi. The Highlands may, as a region, run up to this river, although due to Durnholde's inclusion Lordaeron's domain likely still runs up to Thoradin's Wall.