Historian Llore is a human member of the Timewalkers investigating the Timeless Isle alongside Kairoz. He is found at the Whispershade Hollow.[64.9, 50.6]

During Warcraft's Anniversary, Llore could be found in the Royal Library in Stormwind City, acting as the Alliance counterpart to Historian Ju'pa.

[WoW's 15th Anniversary], Llore and Ju'pa appeared in the Caverns of Time. 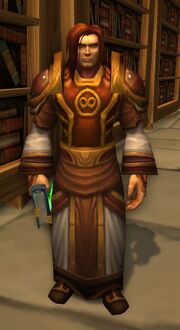 Llore in Stormwind during the 12th anniversary.

Greetings! I am Historian Llore! Everyone says I smile too much, but I don't think that's possible!

Llore is the author of the following tomes: