For the encounter in Ulduar, see Hodir (tactics). 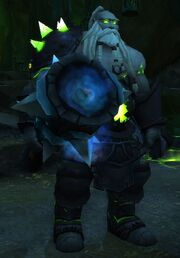 Hodir corrupted by the fel.

Hodir is a titanic watcher who resides in Ulduar. He once resided in the Temple of Winter, lending his guidance to the frost giants in the Storm Peaks. The Sons of Hodir, a faction in the region, refer to Hodir as a father figure or creator.

It was announced on Feb 17, 2009 that Hodir would be a raid encounter in the then-upcoming Ulduar raid dungeon.[1] After being defeated, Hodir is redeemed and teleports away to optionally help the players against Yogg-Saron later.

Hodir was one of the Keepers created by the Pantheon to lead the titan-forged armies against the forces of the Old Gods. Hodir was imbued with power by Golganneth. Together with Thorim and Ra, he battled and defeated Al'Akir the Windlord.[2]

He disappeared after Loken's betrayal of the other titanic Watchers.[3] It is said that the temple guardians are verified to be deceased. A sulfurous odor suggests that death resulted from a fire-base entity and that the previously established cold weather patterns at the temple have ceased.[3]

Now the watcher dwells in an ice cave in the Halls of Winter, forced to serve the will of Yogg-Saron.[4] Hodir first appears as a boss within Ulduar. After defeating him, he breaks from Yogg-Saron's corruption and aids the adventurers in the battle against the Old God. When active, Hodir provides the following buffs:

Though Odyn sounds the Gjallarhorn, which the keepers of Ulduar are oathbound to answer, they are unable to for the Burning Legion has invaded Ulduar. Odyn sends his Valarjar to aid the forces of Ulduar in their defenses, and Hodir chases the demons through a portal as they retreat.[5] On the other side, in Niskara, Hodir was captured and corrupted by the Legion, but Thorim and the Valarjar work together to save him.[6] As gratitude, he offers himself to become a champion in service of the Battlelord and remains at Skyhold.[7]