For other uses, see Horde (disambiguation).

The Orcish Horde of Draenor[1][2] (new horde[3] or simply Horde[4]) is the term given to the loose alliance of orc clans that remained on their planet during the orcish invasion of Azeroth. Their main objective was to steal the Skull of Gul'dan, the Jeweled Scepter of Sargeras, the Book of Medivh and the Eye of Dalaran to open multiple portals in Draenor. 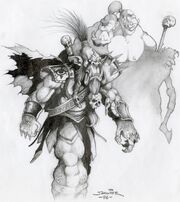 Kilrogg leading his clan to Draenor.

Following the end of the Second War, the Horde of Draenor was rallied by the elder shaman, Ner'zhul,[5] who declared himself warchief.[2] When Kilrogg Deadeye returned to Draenor after the Horde's defeat in the Second War, he was informed of the situation and received orders that the death knights, forest trolls, and dragons he had brought with him should be used by all the clans collectively. Ner'zhul's plan was to steal certain artifacts from Azeroth that would enable him to open rifts to other worlds.[5] Ner'zhul used fear and the brute force of his own Shadowmoon clan to maintain the fragile unity among the clans.[6]

The Laughing Skull clan betrayed the Horde and controlled a special order of death knights who had the knowledge needed to rebuild the Dark Portal. They also captured Grom Hellscream and other members of the Horde. A Slayer of the Shadowmoon managed to defeat Mogor and his clan, freeing Grom and subjugating the order of death knights.[7]

Ner'zhul then sent part of his clan, the Thunderlord clan, the Shattered Hand clan and the ogre mage Dentarg to attack the Bonechewer clan and steal the skull of Gul'dan. But after they killed the captain of the Bonechewer and stole the skull,[8] both the Thunderlord and Bonechewer clans desired to journey to Azeroth and have their clans triumph where Doomhammer had failed; Ner'zhul did not share that vision and attacked them. After that, there was no opposition to the reformed Horde and they prepared to enter Azeroth.[9]

Ner'zhul sent a renewed offensive into Azeroth with the intention of stealing a number of magical artifacts and using them to open new dimensional gateways on Draenor. They destroyed Nethergarde Keep,[10] enlisted the aid of the black dragonflight and the survivors of the Bleeding Hollow clan that hadn't crossed to Draenor[11] and then attacked New Stormwind.[12]

The objective of destroying New Stormwind was to steal the book of Medivh, but it wasn't found as it was stolen by Alterac soldiers before the Horde managed to steal it. Without choice, the Horde constructed a naval fleet and prepared to leave towards Alterac,[13] but they attacked Kul Tiras first. Kul Tiras was not supported by the Alliance and was defeated,[14] so the Horde controlled the seas once again. But before they continued to north, Ner'zhul ordered to enter the Tomb of Sargeras and steal the Jeweled Scepter of Sargeras. The Scepter was guarded by a daemon but it was defeated.[15]

The Bleeding Hollow clan returned to Draenor while Deathwing delivered the rest of the army in Alterac. Aiden Perenolde made a deal with the Horde, if they destroyed Stromgarde and Lordaeron nearest bases, Alterac would give them the Book of Medivh.[16][17]

After the Horde of Draenor defeated the Stromgarde and Lordaeron forces they attacked Dalaran and stole the Eye of Dalaran.[18] After the victory, Deathwing arrived, exhausted and bringing news from Blackrock Spire, the Alliance sent a host of warriors to the Black Morass and engaged the forces of Warsong and Shattered Hand at the Dark Portal,[19] retaking Nethergarde Keep[20] and managed to capture the Dark Portal.[21] The Slayer of the Shadowmoon rallied his forces and broke through the siege, returning the artifacts to Draenor.[19]

Territories of each clan.

Although the artifacts were returned to Draenor, Khadgar discovered that Ner'zhul wanted the knowledge of how to open portals. It was decided that an expedition should venture through the Dark Portal, both, to recover the stolen artifacts and to ensure that the Horde can never again threaten Azeroth. The Horde of Draenor opposed to the Alliance Expedition, at the Dark Portal they even sent some daemons to defeat the Alliance, but this opposition was defeated.[22] 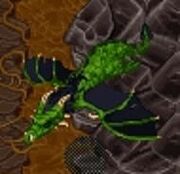 Deathwing in his Lair.

The Alliance attacked the shipyard of Zeth'kur, but the Horde's clans were driven to new heights of fury and were superior in numbers; the clans were defeated and the Alliance constructed ships of war to cross the Devouring Sea.[23] Meanwhile, the Horde was preparing for another attack on Azeroth, but this was discovered by the Alliance and although the Horde's army was too large to be defeated by the Alliance, they launched a strategic attack against Auchindoun to force the orcs to retreat.[24] During the battle the Bleeding Hollow clan was defeated[25] and Kilrogg slain,[26] but at a high price for the Alliance as Kurdran was captured. Khadgar discovered in the ruins of Auchindoun that the Horde also needed the Skull of Gul'dan, but this artifact could also be used to seal the Dark Portal forever. With the objectives of saving Kurdarn and recovering the Skull of Gul'dan the Alliance attacked Deathwing's Lair, after a battle they managed to defeat Deathwing and completed their objectives.[25]

While Deathwing was defeated, the Horde used that time to strike against other Alliance forces: A great orcish armada threatened the captured coasts, and the armies of the Alliance were hard-pressed on many fronts. The Alliance decided to advance further into Shadowmoon Valley, as their only chance for victory was to recover the Book of Medivh from Ner'zhul. The Horde fortified the coastlines but was defeated,[27] the Bonechewer clan managed to capture some Alliance soldiers, but their base was destroyed and the prisoners were released. Then the Shattered Hand clan blocked the pass to Shadowmoon Fortress but were defeated. The Shadowmoon clan, aided by some forces of the Warsong clan and some survivors of the Bleeding Hollow clan fought in the fortress itself, all led by Teron Gorefiend and an special order of death knights.[28] During the battle the Laughing Skull clan used the distraction to steal the Book of Medivh[29] and Ner'zhul escaped with the necessary knowledge to construct the portals in his mind.[30] During the battle Teron was slain and at the end of the battle the Horde was defeated.[28]

A flashback in Warcraft III showing the Alliance Expedition fighting the Horde of Draenor, presumably in Hellfire Peninsula. The trolls came from Azeroth and had passed through the Dark Portal as the orcs' allies. Notice that the scenery is identical (even having floating islands) to after the sundering, even though this battle took place before it happened.

The Horde then launched an attack on the Alliance fortifications at Hellfire Peninsula, although not well equipped their numbers were very great. The Alliance forces in Shadowmoon Valley returned to Hellfire Peninsula and reinforced the base, the orcs never managed to enter the base and had a complete defeat.[30] At the end of the battle the Laughing Skull clan betrayed the Horde of Draenor and made a pact with the Alliance, at the trade of the Book of Medivh, they would destroy the Thunderlord clan to gain dominance in the northern clans of Draenor. The Alliance had to accept and secured the pass in the Blade's Edge Mountains with the support of the Laughing Skull.[29]

Ner'zhul held the ancient scepter of Sargeras in the air, intoning the final words of the spell of conjuration. The air began to swirl and pressed down the assembled masses of the Horde, the crimson skies broke open and revealed the chaotic pathways of the Twisting Nether. As Ner'zhul deployed his remaining forces towards the new portals, the Slayer of the Shadowmoon asked: "Master, shouldn't we recall all of our forces from Azeroth?", but the ancient shaman replied coldly "No, they have served their purpose. From this point on, all that we gain will be ours alone." The Slayer unquestioningly followed him into the swirling madness of the Twisting Nether.[31] Ner'zhul and his followers escaped through the largest of the new rifts as Draenor felt the first of its death throes, the spell of Ner'zhul broke down the fabric of reality in Draenor; unleashing massive earthquakes and tidal waves upon its shores. Without choice, Khadgar and the Alliance had to return to the Dark Portal and destroy the rift between Azeroth and the doomed world of Draenor with the Skull of Gul'dan and the Book of Medivh.[32]

The Alliance fought their way desperately to return to Azeroth,[33] while Grom Hellscream, realizing that Ner’zhul's mad plans would doom their entire race, rallied the remaining orcs and intended to cross the Dark Portal.[34] As the Alliance had a base surrounding the Dark Portal Grom and his forces had to fight for their escape to succeed. They attacked the Alliance base but were later attacked from behind by the rest of the Alliance forces that were returning from Blade's Edge Mountains.[32] As Hellscream and his orcs hacked their way through the human ranks in a desperate bid for freedom, they crossed through the portal,[34] but the diminished Alliance Expedition forces were still holding back many orcs in Draenor's side while protecting Khadgar, and with help of the artifacts he destroyed the Dark Portal.[35] In Azeroth's side, the Dark Portal suddenly exploded behind the orcs who have crossed, for them there was no going back.[34]

Fate of the clans

The Warsong clan managed to escape from Draenor before Ner'zhul opened his portals, alongside part of the Bleeding Hollow[34] and part of the Shattered Hand clan. These three clans later joined Thrall when he revitalized the New Horde.

Ner'zhul selfishly abandoned all the clans and escaped with just his elite followers in tow. The evil group of orcs crossed through their chosen portal just as Draenor blew apart in an apocalyptic explosion. As they thought that they had survived, Kil'jaeden and his demonic minions ambushed them and turned Ner'zhul into the Lich King, while his followers were turned into liches.[38]

The Cabal survived and are still in the Bone Wastes.

It is unknown what happened to the Bladewind clan and the Lightning's Blade clan.

Clans of the Horde of Draenor

Though the unity of these clans was constantly threatened, fear of Ner'zhul[6] and his Ogre-Mage, Dentarg, kept the clans in the line[39] (excepting a few outstanding incidents).

Other factions in the Horde of Draenor

The various goblin merchants and laboratories that could be found in Outland during The Frozen Throne could have been survivors of the goblin mercenaries that followed the Horde of Draenor. Alternatively, they could be non-canon, similarly to the goblins in Quel'Thalas that sold Arthas and the Scourge zeppelins to cross a river in Warcraft III,[41] (in Arthas: Rise of the Lich King Arthas simply crossed the body of water on top of undead bodies).