The many races of the Horde are far more primitive than those of the Alliance and thus are not nearly as technologically advanced. Most advances have taken place in the field of war machines and weaponry, and the Horde had to employ technological "consultants" - goblins - to create the city of Orgrimmar. The introduction of the blood elves into the Horde sparked an increase in technological knowledge, although the technology of the blood elves is greatly augmented by their vast skills in the magical arts. However, the permanent inclusion of goblins, with their emphasis on engineering and mechanical development, into the Horde has opened up tremendous technological potential. Today, the Horde is slowly realizing real gains through technology, both for military and domestic purposes.[1]

Orcs season their heavy machinery with coal tar, which makes them flammable.[2]

Members of the Horde rarely take up the tinker's calling; the faction largely views the use of technology with disdain, stooping only to use goblin technology when they can afford to pay goblins to handle it. Members of the Horde are more likely to rely on shamanic or druidic magic. Relying on goblin innovation has served them well, and often goblins aided the orcs in times of need. Yet there are a rare few amid the orc and troll races who see the advantage of the tinker's craft. Most of them pursue the goblins' path of tinkering, favoring devices and instruments that can cause devastation on one scale or another. Tauren are the least likely to use technology, seeing it as a disturbing disharmony with the natural order. Trolls tend to be fascinated by the destructive properties of technology, and often find ways to put destructive devices such as explosives and firearms to use. Orcs are more adept with technology and the most likely to seek out firearms and other devices to use in times of war, but still they prefer the rewarding feeling of axe and spear through flesh. For an orc, firearms have little tangible reward in battle other than hurting the enemy; most find the weapons impersonal and lacking in honor.[3]

Technology is still a new science in the eyes of the Horde. Trolls and tauren used only comparatively simple tools and weapons before goblins, dwarves and gnomes introduced technology to their people. When the orcs came to Azeroth, they brought with them certain advanced metallurgy techniques, but otherwise they knew little of the higher sciences. Only the Forsaken look upon technology as more than a curiosity, although the orcs are slowly coming around.

Of course, there are some exceptions. Within the deep jungles, troll tinkers seek to combine the voodoo arts with technology. Orc engineers, not content to simply copy stolen dwarven designs, labor to understand the secrets of science to increase their combat firepower. Tauren scientists, still new to this mysterious craft, make enormous devices solely to test the limits of technology. The Forsaken, ever seeking new ways to defeat the Scourge, build devices large and small in the hopes of eradicating the Lich King's forces once and for all.[4]

Some nay-sayers do not appreciate the slow spread of technology. They see this new science as inherently destructive, and believe that left unchecked, technology will eventually lay waste to Azeroth. The actions of certain groups, such as the Venture Company, are clear evidence of this. Some use magic or other means to halt the use of destructive technology, while a few techslayers use its own power against it. Techslayers study and learn what they can about technology, then use that knowledge to keep it in check. The Horde employs far more techslayers than the Alliance, primarily because technology has achieved a lower level of acceptance within the Horde's ranks.[5]

The Horde isn't known for its technology or ranged combat, but it does have elements of both. Troll axethrowers and headhunters dart through wooded areas, sniping at stray targets or flankers, while massive catapults rain death on closely cramped foes. Many siege engineers become reckless in battle, and friendly fire is a constant threat. The Horde severely lacks in technological prowess since the goblins left their alliance. The Horde's reliance on divine magic and beasts has proven a downfall due to their unpredictable and exhaustible nature. And technology still baffles the Horde. Enemy forces can overwhelm a Horde warband with a single siege engine; most warbands are simply ill equipped to handle a strong technological presence.[6]

Although there are always individual exceptions, the various races of Azeroth tend to view technology in different ways.[4]

Like Ironforge dwarves, orcs think of technology as though it were another sort of weapon. To an orc, the engineering craft has little purpose but to help create new and improved methods to destroy his enemies. However, orcs see little reason to endanger themselves in the process. After all, one cannot rise to power within the Horde if one blows himself up with his own weapons! Therefore, orcish devices are carefully built and stable. Even those that are prone to failure include safety precautions that protect their users from harm. Orcs are not terribly innovative. Most of their scientific advancements build on the accomplishments of others. Thus, a number of their technological devices are simply improved weapons and armor originally designed by others. Orcish devices include improved armor, shields, weapons, firearms and siege engines.[4]

The jungle trolls don't consider technology a science, but another form of magic. To them, crafting a technological device is another way of creating a talisman or charm, only with more steps. Harnessing steam power is an alternative means of binding air and water spirits to do one's bidding. Most jungle troll inventions involve the use of natural and alchemical components combined with scientific applications. Jungle trolls don't specialize in any particular area, as orcs do with weaponry. Instead, trolls study whatever scientific application seems the most interesting. Some trolls claim the spirits speak to them in dreams, suggesting new ways they can be called upon by technology. Troll inventions include the poison extractor, swampwalker shoes, and dart grenade.[7]

Tauren do not have much of an inclination toward technology; however, some of their greatest inventions includes the Great Lift in Thousand Needles and the tri-level city of Thunder Bluff. They have the potential to be great inventors, but they don't care for that potential. They want to keep on living the way they've always lived. Science is new to the tauren, many of whom view technology with great curiosity. Once imbued with a basic understanding of scientific principles, tauren engineers understand that the potential applications of technology are limitless. The Great Lift leading to Thunder Bluff is a good example of tauren engineering progress. Tauren tinkers spend a great deal of time building, experimenting and designing, without worrying about failure. Their size and strength allows them to survive catastrophic disasters that would instantly kill a goblin designer. Tauren engineers are unconcerned with the size of their creations. A javelin-throwing contraption might be 10 feet across and weigh 1,000 pounds — all the designer would care about is that he successfully created a working javelin thrower. Few, if any, functional tauren inventions are small and portable. Among the better known tauren devices are the enemy detector, thunderstomper, and various tech-mods designed to improve tauren totems.[8] 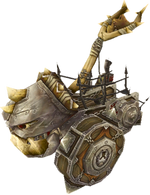 Among the Horde, Forsaken have perhaps the deepest understanding of the workings of science. However, they reject technology as anything more than a curiosity or a simple tool. Creatures of the dark arts, they are more interested in studying and controlling those arts than they are in learning about something that to them remains alien. Still, a few undead delve into the new sciences, employing technology where it serves their own ends. These dabblers create items that employ necromantic power in ways that arcane or divine magic cannot. A perfect example of this is the necromantic amplifier. Like many other Forsaken technologies, it combines science and dark magic into a single package. For this reason, some Forsaken technological items have crafting requirements other than scientific ones. Forsaken inventions include the aura concealment suit, energy polarizer, and the aforementioned necromantic amplifier.[9]

Blood elves create arcane golems held together through magic more than machinery. It may not actually be technology but a completely magical construct. As high elves, they were known to disdain technology, primarily because they considered it an inherently destructive art. It's unclear how much of skill may predate blood elves, but judging from Karazhan it may have existed for a long time prior to the blood elves, and may represent former high elf magic. As high elves the few that dabbled in the art, generally focused on problem-solving devices instead of weaponry. Few elves employed firearms over good, strong bows. Elven inventions included the self-heating cooking pot, softlight hanging lamp and aquadynamic fish attractor.[10] When Arthas Menethil invaded the high elven lands on order from the Lich King during the Third War he also encountered several waygates.[11] As the architecture of the waygates[12] matched other high elven buildings, such as the high elven barracks, it is possible that high elves possessed the technology to create them. The orbs of translocation used by blood elves may be a new version of this technology, or simply the WoW-version of an elven waygate. As with the arcane golems, this kind of teleportation seems to rely as much on magic as on engineering. Other examples of blood elf devices either powered by magic or created to control it are mana bombs and manaforges. Interestingly, especially in the latter case, blood elf technology can be heavily inspired and based off naaru-technology. This makes a large amount of blood elf-technology similar to draenei-technology, which is also based on that of the naaru.