For the ship, see The Sunstrider.

The shrine to Dath'Remar Sunstrider, memorializing the founding of the Sunstrider dynasty

Sunstrider is a Darnassian term that means "he who walks the day".[7][8] The earliest named Sunstrider is Dath'Remar, a renowned Highborne who founded the kingdom of Quel'Thalas and created its Sunwell. The family name "Sunstrider" was an oddity among the moon-worshipping night elves, chosen by Dath'Remar's ancestors to symbolize their penchant for delving into the unknown, for breaking expectations and throwing caution to the wind in their search for greatness. Like his bold progenitors, Dath'Remar carried on this tradition with pride.[9]

Dath'Remar was born a member of the wealthy and powerful Highborne. He was a wise elf, but was obsessed with the Highborne's magical way of life, and resented the restrictions placed upon his kind by the night elf government following the War of the Ancients. He and the Highborne were eventually banished from Kalimdor by Malfurion Stormrage for their refusal to forsake magic. Dath'Remar led his people across the newly-formed Great Sea to the land that would one day be Lordaeron, founding the new Kingdom of Quel'Thalas to the north, where he established his royal bloodline and renamed his people the high elves. He created the Sunwell using a stolen vial of the Well of Eternity and erected the elven capital of Silvermoon. Dath'Remar's weapon was called

[Felo'melorn], an ancient rune-inscribed sword which would also be wielded by both of his known descendants. During his reign, the armor Lu'minellia was also crafted.[10] Dath'Remar stepped down as leader after establishing his empire. He believed, and proclaimed, that Quel'Thalas would come to dwarf the night elves' civilization and stand as a monument for the ages. The Sunwell was named in Dath'Remar's honor, in recognition of the Highborne leader's bold quest to reignite their culture.[11] 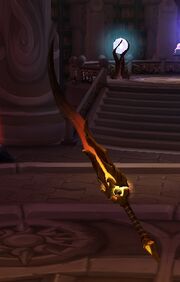 Felo'melorn, the Sunstrider family blade, as an Artifact.

Anasterian Sunstrider, the great-grandson of Dath'Remar,[10] ruled Quel'Thalas for roughly 2,800 years. This period encompassed the bloody Troll Wars, in which Anasterian dealt the elves' hated Amani neighbors a heavy blow; and Anasterian also ruled during the Second and Third Wars, facing the Old Horde and the Scourge. Although uninterested in the humans' war, he joined the Alliance of Lordaeron during the Second War when his own kingdom was threatened but withdrew from the Alliance following the war's conclusion. Anasterian was killed during the invasion of Quel'Thalas by the Scourge in the Third War, along with the Convocation and a staggering 90% of his people. He was slain in a heated duel with Arthas Menethil, the man who would become the Lich King. Anasterian's son and successor decreed that Anasterian would always be remembered as the last king of the high elves.[10]

Kael'thas Sunstrider, Anasterian's only son, took up the mantle of leadership in his father's place after the crushing Third War. Although he felt lost without his beloved father, Kael resolved to do all he could for his shattered kingdom and its beleaguered people and promised to make his father's memory proud. As the last of the Sunstriders, Kael carried a heavy burden and took on sole leadership of the Sunstriders' remaining subjects without the destroyed Convocation of Silvermoon, which he never restored. Kael'thas renamed the high elves the "blood elves" in honor of their fallen king and brethren and named Lor'themar Theron his steward while he left Quel'Thalas for Lordaeron and then Outland, seeking to bring his people deliverance and claim vengeance for the destruction of their kingdom. Kael'thas was hailed as a true champion of the blood elf people, and a proud defender of their race's ancient lineage. 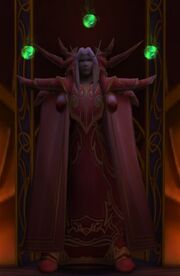 A monument to Prince Kael'thas Susntrider, last of the Sunstriders.

The last of the Sunstriders faced many challenges after leaving his homeland, coming to reside in Tempest Keep, a spacial fortress in Netherstorm. Damningly, the prince fell prey to Kil'jaeden the Deceiver's influences while sojourning on Outland, covertly shifting his allegiance from Illidan Stormrage's forces to the Burning Legion, in return for the promise of his people's salvation.[12] After the fall of Tempest Keep, he returned to the Isle of Quel'Danas, the seat of the Sunwell, to further the plans he had struck with Kil'jaeden.

In the Legion's shadow, Kael'thas's decisions made him many enemies, but the most furious opposition ironically came from his own people.[12] His own kingdom eventually branded him a traitor after the prince returned in order to summon forth his master, and the people of Quel'Thalas were shaken by his actions.

Kael'thas was eventually killed and buried on Quel'Danas, the same place as his father.

Kael'thas' death brought an unhappy end to the Sunstrider dynasty, casting a bitter pall over the blood elves left behind.[4] His statues remain standing in Silvermoon City, which has inspired mockery from both the Alliance and Horde.[13]

Kael was succeeded by his regent, Lor'themar Theron, who has continued to style himself as the "regent lord" in the wake of House Sunstrider's downfall. This is in part due to Kael'thas officially decreeing that King Anasterian would be the last king of Quel'Thalas,[14] but also because Lor'themar does not wish to start his own dynasty.[15]

Dath'Remar continues to be honored in Quel'Thalas, and aspiring blood elf adventurers are encouraged to pay their respects to the founder of their kingdom - all who prosper in Quel'Thalas do so thanks to him.[16] Anasterian is remembered as one of the blood elves' greatest heroes, and they are known to charge into battle with his name upon their lips.[17] The Monument to the Fallen, erected during the Battle for Quel'Danas, quickly took on additional significance for the sin'dorei, as it was on Quel'Danas that Anasterian made his heroic last stand against Arthas.[18]

[Felo'melorn], was eventually recovered by a fire-favoring mage of distinction.