The House of Wrynn,[1] also known simply as House Wrynn[2][3] or the Wrynn Dynasty,[4] is the ruling house of the kingdom of Stormwind. 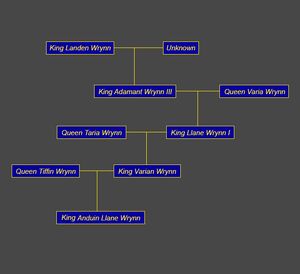 The House of Wrynn's family tree.

The kingdom of Stormwind was originally founded 1,200 years[5] before the First War by the descendants of the Arathi bloodline, who had migrated south from the nation of Arathor.[6] Traveling past the rocky mountains of Khaz Modan, their journey finally ended after many long seasons, and they settled in the northern region of the continent they would name Azeroth. In a fertile valley they founded the kingdom of Stormwind, which quickly became a self-sufficient power in its own right.[6] It had a long and prosperous history, with the king served loyally by the knights of the Brotherhood of the Horse and the clerics of the Holy Order of Northshire Clerics. Secretive conjurers also served the kingdom, and as such Stormwind Keep had its own court conjurer.

The constant bickering and infighting that marred the rules of the former kings of Arathor had no place in the court of Wrynn, and all had been peaceful for many generations in the kingdom until the Gnoll War. King Barathen Wrynn ended the conflict by scattering the unified gnoll packs and bringing back peace, solidifying the rule of the Wrynn dynasty over the entire kingdom.

The family survived the First War, but were not restored to the throne of the kingdom until after the end of the Second War. The kingdom was renamed Stormwind after the Third War. The Wrynns had minimal ties to other houses, though their friendship with the House of Menethil (the ruling house of Lordaeron) prior to its destruction at the start of the Third War is well-documented. The House of Wrynn remains in control of Stormwind, although Anduin (who was acting king after his father's disappearance) ruled through co-regents for a time.

Barathen "Adamant" Wrynn died during the Gurubashi War. King Llane Wrynn was assassinated by Garona Halforcen at the end of the First War. Tiffin was killed by a rock thrown at her head in a riot by the Stormwind-based Stonemasons Guild (which would eventually become the Defias Brotherhood). When the Burning Legion's third invasion came to Azeroth, Varian led the assault at the Broken Shore along with Sylvanas Windrunner. Varian was killed during the battle and his son Anduin became the new ruler of Stormwind.