Wowpedia
Register
Don't have an account?
Sign In
Advertisement
in: Hozen tribes, Hozen, Mists of Pandaria,
and 2 more
English

The hozen are a monkey-like race that live in Pandaria and various islands of the Great Sea.[2] Short-lived and immature, they are a passionate and playful race, mischievous pranksters that "act like a group of 14 year old boys running around together in the jungle."[3] The hozen are native to Pandaria, and are found all over the continent.

Mostly a wild and independent race, hostile to any who wander into their hunting grounds, one tribe of forest hozen were befriended by the Horde after adventurers earned their grudging respect. Equipped with machine guns and weapons from the Horde, this hozen tribe were trained and recruited to join the battle against the Alliance and their new allies.

The hozen are uncannily dexterous foragers and hunters who dwell in tribes among treetops and mountains of Pandaria. They are a simple race driven by their passions.[4]

The hozen are a short-lived race. Their elders are typically no more than twenty years old,[5] usually fourteen or fifteen,[6] and few hozen survive past their twentieth birthday.[6] As a result, their relative maturity when compared to the other speaking races is quite minimal[5] and their society lacks roots (and rules) as a result. Uncouth and impulsive, hozen nonetheless play, live and squabble together... at least until their clans grow so large that they collapse into multiple smaller groups.[7] 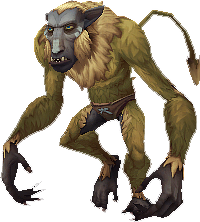 In contrast to the very reserved and polite jinyu, the hozen are a passionate people that love to love, love to hate, and love to feel any emotion they can feel, as long as they feel it strongly.[5] Initially, the August Celestial Yu'lon considered the hozen to be innately violent, often selfish and shortsighted, unable to work together long enough to build a proper civilization of their own. However, as time passed, Yu'lon questioned her assumptions and realized that, while it is easy to see the short-lived, short-tempered hozen as troublemakers, they live full, wild lives in the years they have.[8]

Hozen love to hunt and fish, and often will assault anyone and anything in their hunting grounds.[4] The other races of Pandaria are therefore careful to avoid these areas, but this is often not enough to avoid conflict. The hozen's notoriously short tempers grow even shorter when their hunger pushes entire clans, including elderly and young hozen, to ravage food sources outside of their territory, either gathering enough food or seeing enough hozen die in the process to ensure the survivors’ continued health.[7]

Hozen skulls are often found scattered among their huts and campfires. Jinyu collect hozen skulls as prized tokens, and use them to perform ceremonial rites; the older the skull, the more potent its magic.[9] Hozen are known to keep and tame tigers,[10][11] although they have also been known to be preyed upon by tigers,[12] as well as by crocolisks.[13] Hozen seem to live on a diet composed mostly of fish, or as they call them, "slickies", and sometimes catch them using bait made from bugs' legs.[14]

The Jade Forest's mountain hozen fear the venomous Grove Vipers and often hunt them out of pure spite.[15]

The hozen of the Kun-Lai mountains are unusually aggressive, even by hozen standards. Food and supplies are often scarce in this hostile terrain. When times are hard, the hozen leadership may declare a "ravage" on nearby settlements. During a ravage, every hozen strong enough to walk joins in on a massive swarm attack on nearby villages. In this way, they ensure they either acquire enough food to last the winter, or they lose enough of their weakest to ensure their current supplies are enough.

For years, the Shado-Pan and grummles have maintained an uneasy peace with the hozen in exchange for food tributes. Fear of the Shado-Pan keeps the local tribes in check... Usually.[16]

What's in a name name?

Hozen have a rite of passage for their people that celebrates martial skill. Most hozen respect good fighters, or good "grookers" as they say. Those that have shown their strength in battle earn their "name name". Instead of being addressed by their name once, they are addressed by their name twice, and this is shown as a title of respect.[17]

Some young and rambunctious hozen are trained from an early age to use boxing gloves so they don't accidentally kill their tribe members, and more importantly, to keep them from picking their noses.[18] The hozen rely on dirty guerrilla tactics. Ambushes and traps. They are able to swing and leap from tree to tree and use thick trees for cover.[19] Hozen sometimes take prisoners, keeping them in bamboo cages.[20]

During the Age of a Hundred Kings, several races settled in the land surrounding the Vale of Eternal Blossoms, the hozen among them. The bold and mischievous monkey-men came to inhabit the dense jungles surrounding the vale.[21] They worshipped the August Celestials, and in return, the spirits offered them knowledge and guidance. For a time, there was peace.[22]

Long ago, only a few years before the War of the Ancients, a hozen known only as the Monkey King had become the leader of an ungovernable people. He had risen to power without spilling a single drop of blood and was beloved by every hozen tribe, despite that hozen fought endlessly, constantly, for the simplest reasons. Any disagreement meant physical violence, but the Monkey King knew this. So he told the hozen tribes, "I am the Monkey King. Your tribe supports me with all its heart." When a single hozen would question him, he would tell them that their tribe's leader had already agreed to it. No hozen wanted to challenge their leader on a whim--and be in a fight--so they declared, "You are the Monkey King." When the tribe leaders learned his name, all of their subjects were already calling him the Monkey King. They were confused, but they did not want to fight their people, so they did not challenge him either. The Monkey King's wild claim, his lie, eventually became true because nobody dared to disagree with it. Soon tribal fighting had ceased. The Monkey King passed judgment on all disputes and the hozen obeyed.[8]

The hozen have been at war with the jinyu for a very long time.[3] At some point long ago the hozen approached them for help; the jinyu felt sorry for them and taught them how to survive. The jinyu gave them their trust, but over time the hozen grew strong and bold and began taking the land for their own.[23] During Lei Shen's conquest of Pandaria, both the hozen and the jinyu agreed to help the other withstand the onslaught of Lei Shen and his mogu armies. However, on the eve of the jinyu's final stand against the mogu, the hozen betrayed them, having secretly made a pact with the Thunder King in exchange for preferential treatment (a promise that was never kept). The hozen's betrayal ensured the defeat of the jinyu and created a bitter rivalry between the two races that would last for centuries.[24]

Facing the hozen's "dirty guerilla tactics", the jinyu are outwitted by the hozen at every turn. The hozen are vastly superior on land, especially in areas with thick tree cover, but the jinyu have a strong advantage on or near water, allowing them to defend Pearlfin Village.[19] The jinyu consider the hozen "careless, filthy beasts".[9]

The hozen took part in the Pandaren Revolution, covertly digging tunnels that would lead them behind the mogu defenses.[25]

There are jungle hozen and mountain hozen, the heartier kind,[3] and Forest Hozen.[4] According to the Monkey King there are also sky hozen.[26]

While most hozen are hostile, there are some of the less wild forest hozen that have made themselves homes amongst the pandaren, often acting as farmhands, or merchants. A hozen can start their own proper farm in the Heartland if they want to, and even earn a place as a member of the Tillers council. Some have begun training in Tian Monastery in the Jade Forest. Such individuals are accepted on their personal merits, and there is no prejudice placed on them by the pandaren due to the actions of their species as a whole.

Two hozen with wings, Ginger-Ginger and Flap-Flap, can be found in Zuldazar. When asked how they acquired wings, the Monkey King responds "There are many secrets both mysterious and divine, you have yours and I have mine." They are presumably the sky hozen that the Monkey King mentioned.[26]

The following are notes of wisdom proclaimed by the wisest of hozen on the Wandering Isle:

Hozen 'wisdom' can also be found recorded on scrolls in the form of Hai-pu.

Hozen lore can be discovered through the following lore objects, hidden throughout Pandaria:

Discovering all of these objects will earn the achievement

[Hozen in the Mist], and initiate the

[30-35] Hozen in the Mist quest, inviting the player to visit Lorewalker Cho, who will tell the player a short story about the hozen.