“Know that Huln Highmountain stands before you. Huln of the eagle spear!”

Huln Highmountain (also known as Huln of the eagle spear) was the spokesman for all the tauren tribes gathered by Krasus to help the night elves in their fight against the Burning Legion during the War of the Ancients.[2] Huln carried the Eagle Spear, Spear of the Wild Gods, now mostly known as

[Talonclaw], upon which were carved markings that described the history of the weapon and the feats of its previous owners.[2] Huln and his tauren played a crucial role in several battles during the war, and for his bravery, Huln and his people received a blessing from the Wild God Cenarius, so that they would always have the demigod's favor: the Horns of Eche'ro.[3] 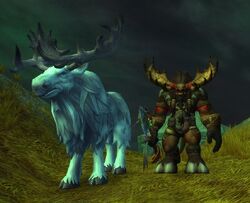 When a new and mysterious enemy came to the world, Huln united the warring Rivermane, Bloodtotem, and Skyhorn tribes under the banner of his own Highmountain Tribe.[4] He was asked by Krasus, the future version of the dragon Korialstrasz, to aid the Kaldorei Resistance in their war against the Legion. After Huln's life was saved by Jarod Shadowsong, he promised to carve his name on his spear, which would cause Jarod to be honored for generations of Huln's line.[5] Huln fought alongside the Wild God Omen, but Omen became gravely wounded and poisoned by fel energy. Just before he succumbed to corruption Omen blessed Talonclaw, which had previously been blessed by Ohn'ahra and Ursoc during the time of Huln's ancestors.[6]

Huln won much of his glory during a battle in Azshara. Huln rescued Unng Ak and his Blackmaw tribe,[7] and found a moose favored by Malorne named Eche'ro who would be his companion and mount forever after.[8] He received a blessing from Cenarius, so that his people would forever have the demigod's favor, granting them the Horns of Eche'ro: their moose-like antlers.[3] He protected Malfurion Stormrage while the druid summoned dryads to the battlefield,[9] and aided his friend Jarod in defeating Tichondrius at Eldarath.[10]

In the final battle for the Well of Eternity at Zin-Azshari, Huln fought a doomlord named Xyburn, who had made it his personal mission to eradicate the tauren race. When Huln was seemingly beaten, he struck Xyburn in the left eye. Before he could slay the doomlord, Xyburn and all the other demons were sucked back into the Twisting Nether due to the efforts of Malfurion and Illidan Stormrage, who had worked together to close the Legion's portal with the Dragon Soul. Xyburn vowed revenge on Huln, all tauren, and the weapon that had taken his sight.[6]

After the War of the Ancients, Huln returned to his homeland and it was renamed Highmountain in his honor.[10] But for Huln, the war did not end at the Well of Eternity. With the Legion defeated, he focused on the monster that got away: the newly-christened Deathwing. He confronted the Destroyer at Neltharion's Vault[11] and, with the aid of Igrul the Scalebane, retrieved the

[Hammer of Khaz'goroth] from within. Huln decided that while it was not powerful enough to kill Deathwing, the artifact could at least be used to banish the dragon.[12] Huln and an uprising of Deathwing's drogbar slaves battled the Earth Warder, and Huln banished Deathwing from the land, sending him to Deepholm.[13] Lastly, Huln used the Hammer of Khaz'goroth to purify one of Deathwing's eggs, and it hatched into an uncorrupted black whelp named Ebyssian.[14]

Long ago, the Old Gods sought to claim Highmountain. Their campaign was led by Uul'gyneth. Huln Highmountain gathered heroes from among the tribes, and fought against Uul'gyneth's servants, the Necrodark. Yet the forces of shadow were too great to overcome. So Huln devised another plan. Wards were placed to lock away the Old Gods' influence. Though the general survived, Uul'gyneth's essence was trapped.[15]

Huln placed a ward at Snowblind Mesa to protect the mountain from the servants of the Old Gods.[16]

At the end of his life, Huln Highmountain bequeathed Talonclaw to his successor and went to join his ancestors. Legend has it that Ohn'ahra herself appeared to carry the spirit of the great chieftain into the sky.[6]

The Highmountain tauren of the Broken Isles are descended from Huln and the other tauren who fought in the War of the Ancients.[17] Huln's descendants helped the Unseen Path, a night elf hunter organization, by leading them to the site in Highmountain where they would build Trueshot Lodge.[18] His spear,

[Talonclaw], is a sacred artifact to the tauren in the region.

Huln is today considered the greatest tauren to have ever walked Highmountain.[19] The whelp he rescued from Neltharion's Vault, Ebyssian, has continued to watch over the tauren hero's descendants for ten thousand years under the guise of Spiritwalker Ebonhorn, only revealing his true identity to the High Chieftains upon their ascension ceremony.[14] 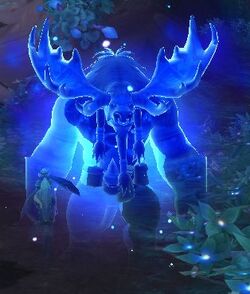 When Huln died, his spirit was taken to Ardenweald, an afterlife for those connected to the forces of nature. In time, he joined the Wild Hunt and became known as the Horned Hunter.[20][21]

He was assigned by Lord Herne to cull the devourers, and in the midst of his mission was approached by the Maw Walker, who sought his aid in finding former Night Warriors. Huln was quick to agree, on the condition that the Maw Walker help in completing his mission.[22] As the pair struck out against the devourers, they discovered Voras, the Realm Eater. After a failed ambush attempt on Voras' life, Huln and his ally retreated to Root-Home.[23] Realizing that Voras was content to roam the Elder Stand, Huln determined that they needed a way to lure it to them. As part of his gambit for the fight, he sent his ally to Gormhive in order to gather expended wildseeds and Bulging Digestive Sacs from the gorm within.[24][25]

Knowing that they would be successful, Huln moved on ahead to prepare the hunting ground, and was soon joined by the Maw Walker.[26] Remarking that hunting is a battle of wills, with life or death in the balance for them all, Huln set up the bait to lure Voras from the Elder Strand. After the pair successfully killed Voras, Huln declared that Voras was no easy prey, even for the Wild Hunt.[27] With his quarry slain and duties fulfilled, he remarked that the tirnenn were more than capable of defending their home from the lesser devourers. He then departed to report the mission's success to Lord Herne. With his task accomplished, Huln fulfilled his end of the bargain by seeking out the Night Warriors of Elune. He personally considered this venture a true challenge and vowed to not rest until he found them.[28]

After Gorak Zhar was killed and the Drust beaten back, Huln was present within the Winter Queen's court celebrating their victory.[29]

Irritated
Mess with the bull, you get the horns.