“Led by the intrepid Ji Firepaw, the Huojin Pandaren are quick to act and quicker to fight for what they believe in.”

The Huojin Pandaren, often shortened simply to the Huojin,[1] are a group of Horde pandaren led by Master Ji Firepaw that adhere to the pragmatic Huojin philosophy, one of the two main schools of thought among the residents of the Wandering Isle.

The Huojin firmly believe injustice must be met with a swift and decisive response, though this response should be flexible and calculated for the situation at hand; to the Huojin, the end will always ultimately justify the means. When the Wandering Isle pandaren reestablished contact with the outside world, the Huojin would be drawn to the scrappy practicality of the Horde,[2] and would commit to aiding their new allies in many of the conflicts to come.

Those who follow the path of the Houjin are impulsive, quick to action, and practical. To them, inaction in the face of adversity will always be the greatest injustice. Their ideological opposites are the Tushui Pandaren, fellow Wandering Islanders, who sided with the Alliance instead when the time came. Both groups represent the majority of pandaren within their respective factions. 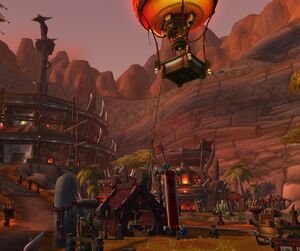 The Huojin Camp in the Valley of Honor

Huojin philosophy first originated among the pandaren of the Wandering Isle, eventually gaining a large number of adherents among the populace. By the time the mists of Pandaria fell, the order was led by the spirited Ji Firepaw. The Huojin at this time lived in balanced coexistence with their philosophical opposites in the form of the Tushui.

Shortly before the arrival of the Horde and Alliance, the Huojin were active in defending Wu-Song Village from an incursion of hozen.[3] Soon afterward, the Alliance gunship known as the Skyseeker would fatefully crash into Shen-zin Su and the island, with dire consequences. The event gravely wounded the giant turtle and would require the combined efforts of the Huojin, Tushui, and the Alliance and Horde survivors to repair.

During the crisis, the two rival pandaren philosophies would come to a head, with Ji Firepaw and the Huojin taking violent, drastic, and risky action in order to prevent disaster. Though their actions came close to killing Shen-zin Su, the Huojin and their allies were successful in reversing the damage done and healing the island.[4]

After these events, and the difficult choices involved, Ji and the Huojin decided to leave the Wandering Isle. They found themselves naturally attracted to the Horde's values of strength and conviction, as opposed to the Tushui interest in the Alliance. Ji would accept the invitation to join the Horde, and traveled to Orgrimmar with some companions to meet with Warchief Garrosh Hellscream in person.[5] After proving himself to the Warchief, Ji and the Huojin were officially inducted into the Horde.

Since that time, they have committed themselves to their new faction, such as representing the Horde in the conflict over the Temple of Kotmogu in the Vale of Eternal Blossoms. The Huojin would also later establish a base on the Timeless Isle of Pandaria from which Horde champions explored the island. Ji Firepaw himself quickly became a major Horde leader, though this cost him dearly during the subsequent Siege of Orgrimmar. Despite what happened in the Siege, Ji and his pandaren remained in the Horde.

The Huojin reinforced the Frostwall garrison with Frostwall Guards led by Shield Captain Liang. Their banners can be found next to them.

Ji Firepaw was not present for the Orgrimmar parade or the dinner as he was far away. His followers, however, participated in the feast and presented their rituals, an idea requested by Baine Bloodhoof.[6]

The Huojin would join the other factions of the Horde in fighting the Alliance as part of the Fourth War. Huojin monks subsequently took part in many missions alongside heroes of the Horde, directed at various targets across Azeroth.

During the Faction Assault on Nazmir, a force of Huojin led by Brewmaster Lin set up a command post in the north of the region and began helping to direct the local defense. Lin and his troops were ultimately targeted by the Alliance, who sought to destroy the Horde's command structure in the area.[7]

During the Faction Assault on Tiragarde Sound, a small group of Huojin Disciple was sent to support the invasion.

During the Assault in the Vale of Eternal Blossoms, a group of Huojin Defender led by Ji Firepaw fought to protect the Shrine of Two Moons. 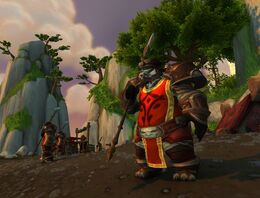 Huojin Sentries on the Timeless Isle

“We call those vicious monkeys swinging into town hozen. They keep to themselves normally, but they know something bad is coming, so they're here to steal our supplies.
In situations like these, the clear answer is the only answer. These monkeys will leave when we force them to leave! To not defend our town and those we love would be the only true crime. Thus is the way of the Huojin.”

The Huojin philosophy is also exemplified by the following scroll that can be found at the Shang Xi Training Grounds:

"Always challenge. Always question. In the pursuit of a greater good, inaction is the only wrong."
- Master Zurong

The Path of the Huojin is marked by practical and decisive action. Followers of this discipline believe that morals and ideals are not absolute but change with circumstances.

As such, a Huojin Master must remain flexible in his or her thinking, always evaluating the greater good.