Hydras are three-headed amphibious beasts native to both Azeroth and Outland. Historians have long disagreed about whether the immense hydras of Azeroth and Outland share a common ancestor. What is clear, however, is that these ruthless creatures have existed on both realms since ancient times.[1] Each head appears to display a level of independent behavior. The forms of hydras vary somewhat between the two worlds. 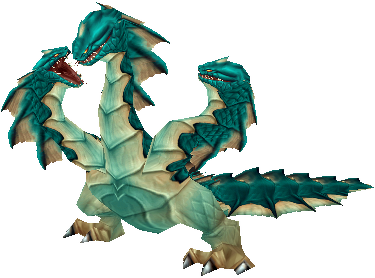 Hydras in Azeroth are found along the coasts of Darkshore, Ashenvale and Dustwallow Marsh, and were also found in Azshara before the Shattering. Some seem to be intelligent and might be the favored pets or servants of the Old Gods. Aku'mai carries within her a small measure of the Old Gods' power. This three-headed hydra is greatly feared for her mindless savagery and insatiable hunger for living flesh, but the Twilight's Hammer worships her as a divine sign that the Old Gods will soon return.[2] They are reportedly difficult to kill, both because their wounds heal quickly and, when another creature would die from similar wounds, they split into two smaller hydras. This phenomenon is not observed in World of Warcraft, however. Some savage creatures discover ways to use hydras as guardians, though these creatures are by no means domesticated.

The hydras of the Broken Isles, however, look similar to those found on Draenor (see below). 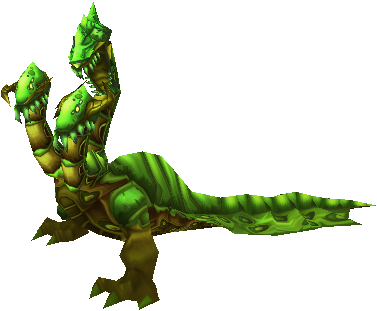 Before its destruction, Draenor's hydras resembled Azeroth's but had four legs and longer bodies.

Outland hydras have a more alien appearance. The outer two of their heads are small and have horns growing out the sides, several small eyes on each side, and no visible lower jaw. The middle head is larger and is notable for a single eye in the center of its face. They are commonly found in the lakes and pools of Zangarmarsh, such as the famous Ghaz'an, a boss in the Underbog.

The Kurenai know how to make armor from hydra hides. However the older the animal becomes, the hide becomes too soft to be effective armor.[3]

In Netherstorm's Ethereal Eco-Domes, there is a single hydra called Markaru whose natural growth has been accelerated by the Ethereal technology. Aurine Moonblaze, an envoy of the Cenarion Expedition that was sent to investigate the technology, tasks you with retrieving its heart for study.

Witnessed only on Azeroth, these hydras are seemingly so massive that only their heads have ever been seen, while their bodies remain submerged beneath water or sand.

Four-legged hydras are found on both Azeroth and Draenor.

Please add any available information to this section.
Four-legged hydras can be found in Nazjatar, notably populating the Ashen Strand. There, hydras of multiple different groups are fighting against each other for territory, with three identified groups (Siltridge, Voidscale and Stonemaw) each led by a different Scale Matriarch.

The hydras of Draenor are large, three-headed, four-legged reptiles with various elemental or natural breath abilities. Most hydras live on Draenor's shores, but some can be found in swampy areas inland.[4][5] Despite often living among the mushrooms growing near many of the shores, they are not always resistant to the infestation.[6]

Another group of green hydras, similar to the Lernaean, called Varashian can be found in the Writhing Mire in north-western Spires of Arak.[7]

These hydras are captured by the Shattered Hand orcs, who use their venom as poison on their blades.

The Burning Crusade hydra Mragesh was originally planned to appear in Warlords of Draenor, indicating a link between the two species even despite their different models.

Water elemental members of the Abyssal Council have been known to appear in hydra form, namely The Duke of Fathoms and Lord Skwol. The Frigid Lieutenant is also an elemental.

Megaera is a hydra creature originating from a young cloud serpent. It was twisted into a multi-headed hydra and left to languish beneath Lei Shen's throne.

Mandragoras, vicious plant creatures created by the botani, mimic hydras, but unlike other plant life have been known to improve on the design.[8]

Chromatus is also a multi-headed creature with a head of each dragonflight.

The term hydra may also refer a player character being controlled by another player who is controlling two or more characters at the same time. See Dual box.

Hydras were made a family of tamable hunter pets with the release of the Warlords of Draenor expansion. When tamed, they possess the

Spirit of Atha, a ghostly hydra and part of the three Spirits of Sholazar which are summoned as part of the daily Oracles quest

[20-30 Daily] A Cleansing Song, was briefly tamable between Patch 3.0.0 and Patch 3.0.8. This was due to all three of the spirits being labeled as crocolisks despite Atha using the hydra model.

According to a post on MMO-Champion, the Patch 4.1.0 PTR contained a tamed pet passive with a hydra icon and the ability Bellowing Roar, which had the following description: "The hydra lets out a bellowing roar, increasing the critical strike chance of all party and raid members by 5%."[9] Despite this strong evidence that hydras were being considered as hunter pets, when Patch 4.1.0 was released they did not become tamable.

Hydras are three-headed beasts that dwell in marshes and in damp underground areas. They are notoriously difficult to kill, both because their wounds heal quickly and, when another creature would die from similar wounds, they split into two smaller hydras. Some savage creatures discover ways to use hydras as guardians, though these creatures are by no means domesticated.[10] Hydras are fearless, because they know they are tough customers. They charge with little intelligence or tactics. Multiple hydras (such as those created when a large hydra becomes two smaller hydras) use flanking tactics and attempt to overwhelm a single opponent before moving on to the next.[10]

In Manual of Monsters Appendix Three a creature called Savant Hydra is described however the validity of the source is disputed.