Hyjal Summit is the setting of the Battle for Mount Hyjal instance. It is set four years before the beginning of World of Warcraft around the time of the Warcraft III campaign mission Twilight of the Gods, during in which the demon lord Archimonde leads the attack on Nordrassil while the defenders of Hyjal protect the World Tree. Even the units wear the same clothes they had in that mission. For instance, Horde shamans wear the same wolf-like fur on their heads.

Players assist Malfurion Stormrage, Tyrande Whisperwind, Thrall, and Jaina Proudmoore in defending the World Tree from the clutches of the Burning Legion. 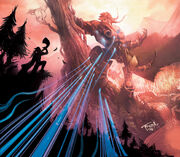 The events begin in the Alliance Base. Jaina Proudmoore commands the base with a small army of Alliance NPCs. After starting the event by talking to her, the raid has to face eight waves of elite undead, such as ghouls, crypt fiends, or abominations. Units have exactly the same abilities they had in Warcraft III, such as

[Cannibalize] for ghouls, "Disease Aura" for abominations, or "Brilliance Aura" for Jaina. After 8 waves, the first boss comes: the lich Rage Winterchill, who was also present in Warcraft III. After Winterchill is dead, talking to Jaina again gets the next boss and his assorted trash waves coming — dreadlord Anetheron. Once the nathrrzim is taken down, the Alliance forces are defeated and the base is overrun by an unstoppable wave of undead. The raid has to move up the mountain to the Horde Encampment.

Just like Jaina did, Thrall assists in person and with several Horde NPCs. The Undead Scourge and Burning Legion keeps sending necromancers, banshees, gargoyles, infernals, and even frost wyrms against the defenders of Azeroth. The boss waves are started by talking to Thrall, first Kaz'rogal (which was not present in Warcraft III), and then the last lieutenant of the Burning Legion, the pit lord commander Azgalor. Once again, after this the base falls and the raid must now help the last defenders of the world in the summit.

In the Night Elf Village are located Tyrande Whisperwind and her Sentinels: archers, huntresses, druids of the Claw, and druids of the Talon. Archimonde is busy channeling the World Tree as the players enter the base. Besides providing an important piece of equipment (the

[Tears of the Goddess]), Tyrande and her NPCs help the players by holding off invading ghouls, crypt fiends, and abominations during the battle. The raid must bring Archimonde down to 10% health, at which point a large group of Ancient Wisps attacks him and destroys once and for all the mighty demon lord.