The Hyldnir are a small faction of frost vrykul living primarily in Brunnhildar Village in the Storm Peaks, hence why they are also known as the Brunnhildar.[1] They are constantly warring with the Sons of Hodir in the name of Thorim. They have a strict matriarchal society with the males, both Hyldnir and other races, being used as manual labor, mostly in the nearby Forlorn Mine. Even females not of their faction are regarded with more respect than any man.[2] Most, if not all, female members of the are warriors and train to compete in the Hyldsmeet, a competition in which warriors fight to determine who shall rule by Thorim's side and ultimately climaxing in

They are the servants of Thorim, a keeper of Ulduar. In these times, the Hyldnir were the allies of the frost giants. That ended when Thorim's wife, Sif, was slain by Loken, Thorim's brother. A war between the Hyldnir and the Sons of Hodir started after Thorim brutally attacked the ice giants that were framed for the death of Sif. Thorim exiled himself to Temple of Storms in grief.

The Scourge has sent three emissaries and they were all dismembered. However, in the village of Valkyrion, the Hyldnir there, led by Yulda the Stormspeaker, accepted the rule of the Lich King in exchange for the power to become val'kyr. They capture proto-drakes and their eggs and transform him into plagued proto-drakes.[3] This act marked the beginning of the war between former sisters.[4]

Some time after, a raid of Hyldnir captured some male goblins of the K3 expedition, leaving the females. Most of them are rescued, except for Zeev Fizzlespark. Trying to rescue him, the player finds a female vrykul prisoner, Lok'lira. She will help get Zeev back, if the player helps her escape. She grants the player a Hyldnir illusion that allows the player to confront Agnetta Tyrsdottar and free Zeev.

Lok'lira wants Thorim to break out of his stupor and rally his allies to retake Ulduar. She tells the player that they have entered the Hyldsmeet. The Hyldnir competition to decide the Thorim's next wife. The player later wins the Hyldsmeet and goes to meet Thorim.

After a short discussion, Thorim left his throne to take his revenge on his brother and stop the war between the races of frost.[5]

The Secret of Ulduar

Sif is now an illusion of Yogg-Saron used to control Thorim. After Thorim is brought to reason, she transforms into a tentacle.[6] 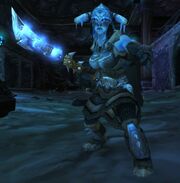 The Hyldnir raid in Northrend to turn the males of the other races into slaves.[7] Thereby, a lot of male vrykul work in Forlorn Mine under the watch of Mildred the Cruel.[8]. They work the slaves very hard, often killing them when there is opposition.[9] The leaders of rebellions are killed without pity.[10]

They use polar bears on the ground. They have traditionally gotten their bears in the Hibernal Cavern.[11]

The Hyldnir are much like amazons, as they are warrior-women who hate men and use them for slaves.