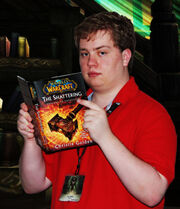 The Red Shirt Guy at BlizzCon.

Ian Bates,[1] better known as "The Red Shirt Guy", is the fan who asked a question about the dwarven leadership during the Lore panel at BlizzCon 2010. A video of his question subsequently went viral. He has since appeared at most subsequent BlizzCons.

He confirmed in a response video that he has Asperger syndrome. Although he did not wish to make his character's name known, he stated that his guild is Carpe Imperium on Malfurion US. He has since moved to Eonar.[2] His main character is a gnome rogue.[3]

He posts as "Insane Guy of Doom" on Scrolls of Lore, where the administrator created a special rank for him - 'Time-Lost Proto Nerd'.[4] The rank is in reference to a joke link on Cracked.com.[5] On August 15, 2013 he became a writer for BlizzPlanet.[1] 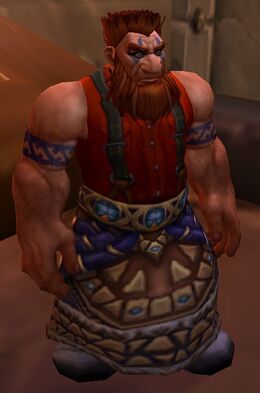 There are some lore issues regarding Kurdran Wildhammer and Falstad Wildhammer. Chris Metzen implied that in Day of the Dragon, Falstad was supposed to be killed, but the book has it so that he survived. This survival was reflected in his inclusion in WoW as an NPC at Aerie Peak.

Falstad was originally in the Cataclysm beta as a member of the Council of Three Hammers according to reports, but was replaced by Kurdran in a later build.

In The Shattering: Prelude to Cataclysm, Varian Wrynn suggests (or decrees) that Falstad be the Wildhammer representative on the Council of Three Hammers.[6]

The Red Shirt Guy: Hello. I have- I just finished reading The Shattering yesterday... and I noticed something. It said that Falstad Wildhammer was going to be on the Council of Three Hammers, but in the beta it's Kurdran Wildhammer, and Falstad is not in the game at all. What happened to him?

The Red Shirt Guy: No, he survived, and, in fact, he is- was the leader of Aerie Peak in vanilla WoW and through Wrath of the Lich King.

Chris Metzen: Right, of course. Uh. Yeah, Alex, what's up with that?

Alex Afrasiabi: *Dismissive noise* Thanks, thanks for pointing that out. We're gonna get that fixed.

The Red Shirt Guy: Thank you!

Probably because he talks like a robot.
"FALSTAD NOT IN GAME. DOES NOT... COMPUTE."

I don't think that's his fault really. Keep in mind a few things (and those that have asked questions before will understand this):

Every person asking a question is standing there perhaps for the first time, with a microphone in front them, a very large TV camera in front of them and very bright lights shining on them. Then, add to it that as you talk, you can hear yourself echoing through the hall. If you wait for that echo to fade, you end up talking much slower than you normally would. It's a bit disconcerting to say the least for anyone who isn't used to that. Getting up in front of thousands of people to ask a question is unnerving for many people given those circumstances. It's not easy and I applaud anyone who gets up and asks an informed question of the panelists under such conditions.

On 30 October, 2010, a screenshot was brought to light featuring Falstad in place of Kurdran on the High Seat, and standing next to him was a dwarf NPC with a red tabard named "Wildhammer Fact Checker". At that time, neither NPC could be found in the High Seat in the beta, leading to speculation that the screenshot was fake. Afrasiabi stated that it was "real"[7] but some still felt it was an elaborate hoax. The Cataclysm beta build released on November 3rd contained the two NPCs, confirming the screenshot as legitimate; in patch 4.0.3a they both appeared on live servers, removing any doubt.

On April 15, 2011, the Council of Three Hammers faction leader story, Fire and Iron, was released on the official site. Written from the perspective of Kurdran Wildhammer, the story features a cameo appearance from the Wildhammer Fact Checker and also gave lore-based reasons behind why Kurdran was replaced with Falstad.

In 2018, Chris Metzen explained that he did actually know at the time that Falstad was alive, but while on-stage he mixed up Falstad and Molok—another dwarf character from Day of the Dragon—in his head.[8]

The Red Shirt Guy re-appeared during BlizzCon 2011, deliberately made the first in line at the lore Q&A. Before the Q&A, Metzen hopped off the stage to give him a friendly hug. The Red Shirt Guy thanked them for adding him to the game as the Wildhammer Fact Checker. He asked about the future of Gilneas. The Gilneas/worgen storyline has been highly criticized since the release of Cataclysm due to the sudden stop of the storyline's progression following the starting zone, despite being told many times over that the player would return to Gilneas eventually. The worgen are scarcely seen in Cataclysm, unlike their goblin counterparts who are seen frequently as well as possessing a "mini-city" in Azshara. The lack of worgen development Alliance side continued to be an issue, especially since the story is progressed for Horde only (including the retaking of Gilneas at the end of the Silverpine quest-chain). With all these issues being lamented, the cliffhanger story of Gilneas was commonly asked about.

Red Shirt Guy: In Gilneas, the questlines end with the strong feeling of to be continued and that we're going back, and the only other zone in the game that had that same type of ending was Hyjal, and we did go back to Hyjal two patches later, so does that mean we're also going back to Gilneas?

Dave Kosak: Two patches later, maybe? ...Maybe, back to Gilneas? I don't know. You know, the- the, uh, Gilneans have such cool architecture and such a cool vibe to it, and it's really hard just because of the nature of their story, we can't really incorporate that outside in the rest of the world, it's hard to do. So it'd be fun to go back to Gilneas and really kind of reclaim that. I don't think it's on the cards right away, but its a really, we just love the feel of that area and everything that they're about.

The Red Shirt Guy went on to suggest what he thought would be the best use for Gilneas.

While the story's continuation was not shot down, the response has caused mixed reactions, from praise and hope for a continued story, to negative responses claiming delaying or discontinuing a race's storyline is unfair.

Despite saying that Gilneas would not be revisited anytime soon, patch 4.3 gave players a brief glimpse of the status of the zone during the legendary dagger quest line. The Gilneans shown here are not shown to be Alliance friendly, however this may be due to the fact that the rogues were seen as assassins. The Blackhowl seemed unaware of their manipulation by a black dragon, and are speculated to have been working with the Alliance in order for Creed to maintain his ruse for both the Gilneans he was making into servants and the Alliance until his army was built up enough and forced into loyalty.